A Comparison of Addiction and Efficacy Oriented Messages for Smoking Cessation 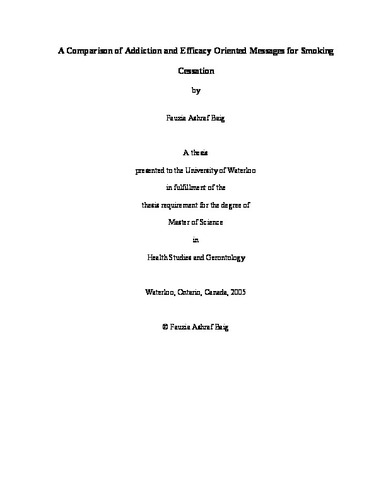 Background: Tobacco use remains a major public health issue. Population-level efforts to curb tobacco use include media to promote smoking cessation. However, these campaigns (including tobacco package warning labels) commonly emphasize the addictiveness of nicotine and the difficulty of quitting with statements like ?nicotine is as addictive as heroin and cocaine?. Addiction oriented messages may have an iatrogenic effect on cessation by undermining behavioural precursors such as self-efficacy, cessation outcome expectations, behavioural control, and quit-aid efficacy. <br /><br /> Objectives: First, to determine the effects of addiction focused messages in comparison to efficacy enhanced messages and control messages on smokers? self-efficacy, cessation outcome expectations, behavioural control, and quit-aid efficacy. Second, to determine if the impact of addiction focused messages differ according to participant nicotine dependency level. <br /><br /> Methods: A sample of adult smokers (n>101) from Kitchener/Waterloo and Owen Sound were randomly assigned into one of three intervention conditions: addiction focused (M1), efficacy enhanced (M2), and control (M3). Outcome measures were collected at baseline, post intervention and 30-day follow-up and included: self-efficacy, outcome expectations, behavioural control, quit-aid efficacy, and outcome expectancies. The 30-day follow-up also included measures of smoking consumption, quit attempts and use of a quit-aid. <br /><br /> Results: Majority of the participants were males and between 18-25 years of age. Mean number of cigarettes smoked ranged from 12 to 15 across groups whereas the mean number of years smoked ranged from 12 to 17. General linear analyses revealed no significant effect of message type or nicotine dependence (as measured by the Fagerstrome Test for Nicotine Dependence) on the outcome variables of interest. However, when perceived addiction was substituted as the measure of nicotine dependence, the analysis revealed a main effect for nicotine dependence on self-efficacy post intervention and on cessation outcome expectations at follow-up. An interaction effect was found for outcome expectancy at post intervention. <br /><br /> Conclusion: The results of this study suggest that acute addiction oriented messages may not negatively impact smokers? self-efficacy, outcomes expectations, behavioural control, quit-aid efficacy, and outcome expectancies. However, this does mean that message orientation should be ignored when constructing smoking cessation messages. In fact, program designers are encouraged to employ messages that limit the use of addiction oriented statements such as ?nicotine is as addictive as heroin and cocaine?. Further research is required to examine the potential cumulative impact of addiction oriented messages on quitting behaviour and its precursors.