Patterns and Behavioural Outcomes of Antipsychotic Use among Nursing Home Residents: a Canadian and Swiss Comparison 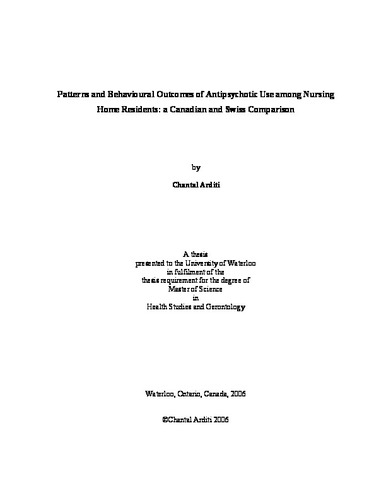 <b>Background. </b> Although antipsychotic medications are primarily intended to treat schizophrenia and psychotic symptoms in adults, they are commonly administered to nursing home residents as pharmacotherapy for "off-label" indications such as disruptive behaviour. However, clinical trials have demonstrated limited efficacy and serious side-effects of antipsychotics among the elderly. As previous studies have reported inappropriate use in several countries, their use in nursing home residents ought to be monitored to detect and reduce inappropriate administration. <br /><br /> <b>Objectives. </b> The aim of this study was a) to determine and compare prevalence rates of antipsychotic use in Ontario and Swiss nursing homes, b) to identify determinants of antipsychotics use in these two countries, by means of a cross-sectional design, and c) to investigate the impact of antipsychotic use on behaviours over time in Ontario and Swiss residents, by means of a longitudinal design. <br /><br /> <b>Methods. </b> This study involved secondary data analysis of 1932 residents from 24 nursing homes in the province of Ontario in Canada and 1536 residents from 4 nursing homes in a German-speaking canton in Switzerland. Residents were assessed with the Minimum Data Set (MDS) tool. Resident characteristics and prevalence rates were compared internationally with the chi-square test. Demographic and clinical determinants of antipsychotic use, as well as behavioural change associated with antipsychotics, were analyzed using logistic regression. <br /><br /> <b>Results. </b> Although Ontario nursing home residents had an overall heavier-care profile than Swiss residents, antipsychotics were administered to 25% of the Ontario residents compared to 29. 5% of the Swiss residents. The adjusted rate among residents without appropriate conditions was also lower in Ontario (14%) than in Switzerland (24. 5%). Apart from schizophrenia, bipolar disorder and cognitive impairment, antipsychotic use was determined by a different range of characteristics in these two countries. Antipsychotic use was not predictive of behavioural improvement. <br /><br /> <b>Conclusion. </b> The high adjusted rates of antipsychotic use in Ontario and Swiss nursing home residents, as well as the presence of "inappropriate indications" and "facility" as determinants of their use, raise concerns about the appropriateness of their administration in both countries. Their lack of effectiveness to improve behaviours also questions their use as long-term treatment for behaviour disturbances. Changes in practice patterns and implementation of policies are warranted to reduce inappropriate prescribing practices to enhance the quality of care provided to residents in nursing homes.

Chantal Arditi (2006). Patterns and Behavioural Outcomes of Antipsychotic Use among Nursing Home Residents: a Canadian and Swiss Comparison. UWSpace. http://hdl.handle.net/10012/716