Single-Phase and Boiling Flow in Microchannels with High Heat Flux 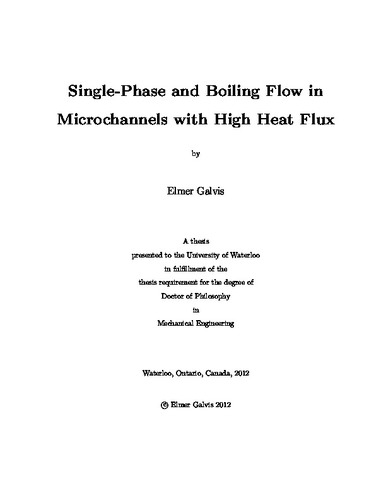 A cooling system for high heat flux applications is examined using microchannel evaporators with water as the working fluid and boiling as the heat transfer mechanism. Experimental studies are performed using single channel microevaporators allowing for better control of the flow mechanics unlike other investigations where multiple, parallel, flow channels can result in a non-uniform distribution of the working fluid. High-speed flow visualizations are performed in conjunction with heat transfer and pressure drop measurements to support the quantitative experimental data. Flow patterns associated with a range of boundary conditions are characterized and then presented in the form of novel flow regime maps that intrinsically reflect the physical mechanisms controlling two-phase pressure distributions and heat transfer behavior. Given the complexity associated with modeling of boiling heat transfer and the lack of a universal model that provides accurate predictions across a broad spectrum of flow conditions, flow regime maps serve as a valuable modeling aid to assist in targeted modeling over specific flow regimes. This work represents a novel and original contribution to the understanding of boiling mechanisms for water in microchannels. The flow patterns in this work are found to be closely coupled with mass flux, heat flux, and channel size; where re-wetting and pressure oscillations play a crucial role, and are likely responsible for its development and evolution. Reversed flow, typically attributed to a non-uniform fluid distribution in multiple channel microevaporators by other researchers, is shown to be a result of the upstream expansion of confined bubbles. During flow boiling, the pressure drop in the microchannel increases with the heat flux for a constant flow rate due to the significant acceleration effects associated with smaller channels, unlike in single-phase flow where the pressure drop is constant. Water flow boiling in rectangular microchannels, although not extensively explored in the published literature, provides an extremely high cooling capacity, with dissipation rates approaching 440 W/cm², making this an ideal candidate for cooling of next generation electronic systems. Single-phase flow studies revealed that pressure and heat transfer coefficient macroscale models are transferable to microchannels with hydraulic diameters down to 200 µm, when the entrance effects and minor losses are properly considered. These studies include laminar developing flow conditions not commonly considered in the literature and fully developed flow. Since the applicability of macroscale theories to microchannels is often questioned, this investigation helps clarify this issue for microchannels within the range of experimental conditions explored in this work. Finally, new correlations for the hydrodynamic entrance length are proposed for rectangular microchannels and good agreement is found when compared with published experimental data over a wide range of Reynolds number. These correlations are more accurate, and original in the sense that they incorporate the effects of channel aspect ratio, and include creeping flow conditions which are currently unavailable for rectangular microchannels. This work represents a major advance in the development of new cooling systems for high heat flux applications requiring dissipation rates in excess of 100 W/cm².