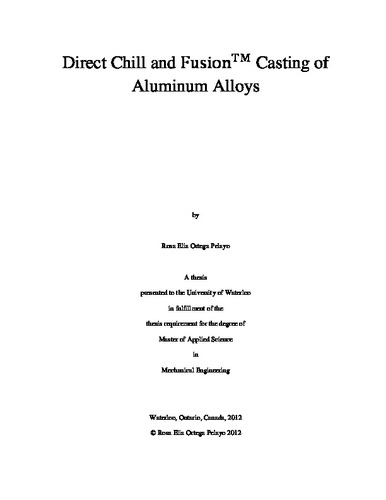 Novelis Inc. recently developed and patented a unique Direct Chill (DC) casting process known as Fusion Novelis Technology. In this process a chill bar is inserted into the DC casting mould which permits for the first time the co-casting of laminate of clad ingots. These ingots can then be rolled down into clad sheet and offer distinct advantages over traditional aluminum clad sheet processing routes (i.e. brazing and roll bonding). The research presented in this Master’s Thesis was done as part of a larger collaborative research and development project with Novelis Inc. The main objective of this research was to investigate the Novelis Fusion Technology and understand it from a scientific viewpoint. The research has been multi faceted and has included: the creation of a thermal fluid model using the commercial software package CFD to model the first the DC and then Fusion casting process, as well as the design and testing of an experimental DC and Fusion caster at the Novelis Global Technology Centre (NGTC) in Kingston, Ontario. This MASc research has been focused on performing both traditional DC (for AA6111, AA3004 and AA4045) and novel Fusion (AA3004/AA4045) casting experiments. First the series of DC casting experiments was performed. During the experiments two arrays of 5 thermocouples were embedded in the ingot during the cast to capture the thermal history of the ingot. Melt poisoning with a zinc rich alloy was also performed as an independent method of determining the sump depth and shape. Other temperature measurements during the experiment (i.e. alloy superheat, mould temperature, cooling water temperature) were done to gather meaningful data for model validation. A series of Fusion casting experiments was performed after the DC casting trials. Three successful Fusion casting trials were performed at NGTC using a lab scale caster with a 152 mm × 381 mm rectangular mould divided in half by a water cooled copper chill bar. For the Fusion casting experiments the AA3003-Core/AA4045-Clad alloy system was chosen since this alloy system has already been commercially produced using this novel technology. In addition to embedded thermocouples in the Fusion cast ingot, and other temperature measurements as for the DC casting experiments, temperature measurements of the chill bar were performed to gather information for model validation. The effect of melt poisoning as the interface of the composite ingot forms was unknown, so only the core of one experimental ingot was poisoned; this gave enough information about the depth and asymmetrical shape of the AA3003-Core sump. The Fusion cast ingots were characterized (both optically and using SEM techniques) at four distinct locations across the width of the ingot, consistent with different thermal histories at the interface and regions where good and poor interfaces were found in the solidified ingot. No clear correlation between thermal history and the quality of the interface could be found indicating that the interface formation during Fusion casting is extremely complicated and other factors such as oxide formation and wetting mechanisms of the AA4045 on the AA3004 need to be understood to gain a more in depth understanding of the conditions necessary to form a defect free interface. Comparisons of the measured thermal histories and sump depth and shape measurements to the model predictions were excellent.