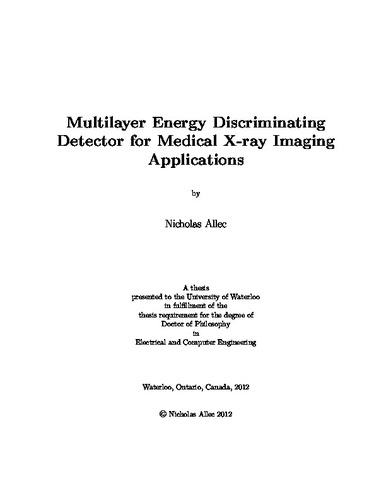 Contrast-enhanced mammography (CEM) relies on visualizing the growth of new blood vessels (i.e. tumor angiogenesis) to provide sufficient materials for cell proliferation during the development of cancer. Since cancers will accumulate an injected contrast agent more than other tissues, it is possible to use one of several methods to enhance the area of lesions in the x-ray image and remove the contrast of normal tissue. Large area flat panel detectors may be used for CEM wherein the subtraction of two acquired images is used to create the resulting enhanced image. There exist several methods to acquire the images to be subtracted, which include temporal subtraction (pre- and post-contrast images) and dual-energy subtraction (low- and high-energy images), however these methods suffer from artifacts due to patient motion between image acquisitions. In this research the use of a multilayer flat panel detector is examined for CEM that is designed to acquire both (low- and high-energy) images simultaneously, thus avoiding motion artifacts in the resulting subtracted image. For comparison, a dual-energy technique prone to motion artifacts that uses a single-layer detector is also investigated. Both detectors are evaluated and optimized using amorphous selenium as the x-ray to charge conversion material, however the theoretical analysis could be extended to other conversion materials. Experimental results of single pixel prototypes of both multilayer and single-layer detectors are also discussed and compared to theoretical results. For a more comprehensive analysis, the motion artifacts present in dual-exposure techniques are modeled and the performance degradation due to motion artifacts is estimated. The effects of noise reduction techniques are also evaluated to determine potential image quality improvements in CEM images.