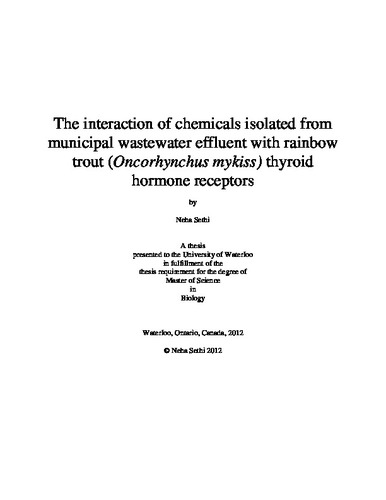 The normal function of the thyroid hormone (TH) system is essential for growth, development and metabolism in humans as well as in other species. The action of TH is dependent on its binding to thyroid hormone receptors (THR) found in the cell nucleus. In some situations, chemicals with structural similarities to TH can bind to these receptors and disrupt their normal function. It has been previously demonstrated that environmental contaminants including, carbamazapine, nonlyphenol (NP), bisphenol A (BPA), and several others are able to bind to the THR as either agonists or antagonists and modulate downstream biochemical responses. Municipal wastewater effluent (MWWE) is a major source of these contaminants entering aquatic environments. Recently extracts of MWWE have been shown to contain chemicals that are capable of binding to THRs. However, MWWE is a complex mixture of chemicals and the specific chemicals have not been identified. In this thesis, a proof of concept was developed for using an Effects Directed Assessment (EDA) approach to isolate thyroid receptor active compounds in MWWE. An EDA is a technique created to extract and identify chemicals from complex mixtures, using various fractionation methods. Once these chemicals have been identified, they are further reviewed for biological relevance. A competitive binding assay for THR was developed and applied to determine the relative binding affinity of known environmental contaminants to THR. Nuclear thyroid hormone receptors were isolated from rainbow trout liver by differential centrifugation. This method involved liver tissue homogenization and subsequent centrifugations to separate the nuclear fraction containing the receptors. The binding characteristics of the isolated THR were evaluated using the thyroid hormones triiodothyronine (T3) and thyroxine (T4) in a competitive binding assay. Minimal binding affinity was present in this assay and future studies should validate the assay further and assure that it is comparable to literature values. Environmental contaminants, including BPA, NP were also tested to determine their relative binding affinity to the THRs compared to the endogenous hormones. High concentrations of both BPA and NP bound to the thyroid hormone receptor, displacing radiolabeled T3 from its binding site. The rainbow trout competitive binding assay was also used to test the binding affinities of extracts from two municipal wastewater effluents collected in the Grand River watershed in southern Ontario. Effluents were extracted using a solid phase adsorbent (HLB Oasis cartridge), eluted with methanol, taken to dryness then reconstituted in ethanol for use in the assay. Both effluent extracts displaced the binding of radiolabeled T3 to the thyroid receptors. The studies demonstrate that a competitive THR assay can be used to detect chemicals in complex mixtures with the potential to interact with THRs. The next step should be to apply the assay using an EDA approach to isolate and identify specific chemicals in effluents that are not yet known to bind to the THR. Interference with the normal function of the TH system has the potential to disrupt normal growth, development and metabolism in aquatic organisms in the receiving environments.