Behavioural Responses of Artificially Reared Rats to Reward and Novelty 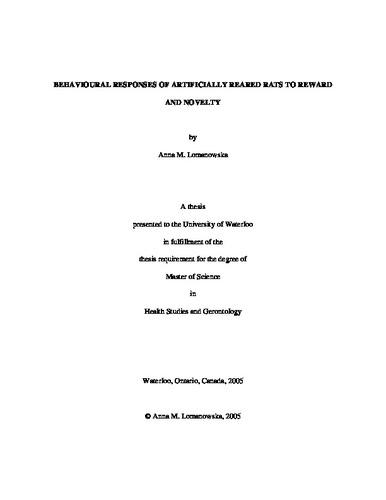 Artificial rearing of infant rats is a useful method for studying the role of early experiences in neural and behavioural development because it permits precise control over key features of the early environment without maternal influence. The present thesis examined the behavioural response of artificially reared rats towards natural and drug-mediated rewards, as well as novel environments. Male Sprague-Dawley rats were separated from their mother and litter-mates starting on post-natal day five and reared artificially (AR, n = 39), or they were reared naturally with a foster mother and litter (MR, n = 43). On post-natal day 21, half the rats from each rearing group were housed in isolation and the other half were group-housed with 3-4 rats per cage. Following three weeks in their respective housing conditions, all rats were exposed to three behavioural tests in the following order: open field, elevated plus-maze and sucrose preference. Additionally, one of the two cohorts used in adolescent behavioural testing was later tested in adulthood for conditioned place preference in response to morphine injection (intraperitoneal, 10 mg/kg). Adolescent AR rats were found to be more active in the open field and in the elevated plus-maze than MR rats. Furthermore, although there were no differences between the groups in fearfulness in the open field, in their first experience on the elevated plus-maze AR rats were more anxious than MR rats in exploring the open arms. AR rats also showed increased preference for sucrose consumption relative to chow, although their overall caloric intake during the 1h test was lower than that of MR rats. In adulthood, AR rats displayed a stronger conditioned place preference response to morphine. There were no significant effects of housing condition on any of these outcome measures. These findings support the potential of this model to contribute to the understanding of the role of early experience in the development of behavioural motivation.