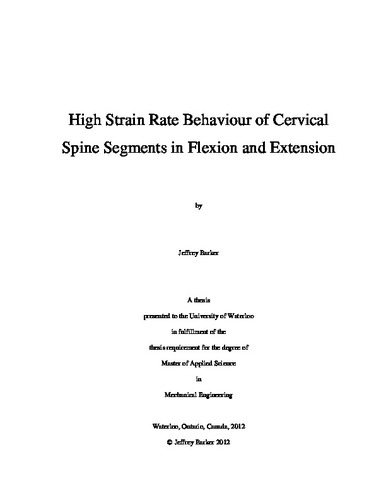 Cervical Spine injuries are a common occurrence during motor vehicle accidents, and they represent a significant economic cost to society. Numerical Finite Element (FE) models have been formulated to investigate the response of the neck under various loading scenarios and to improve vehicle safety. The Global Human Body Models Consortium (GHBMC) was formed to develop a detailed FE model capable of simulating occupant response and predicting subsequent soft tissue injuries in the cervical spine. The objective of this thesis was to validate the neck region of the GHBMC model at the segment level in flexion and extension, and at rotation rates observed during car crash scenarios. Nine cervical spines, under the age of 50, were procured from post mortem human subjects and they were dissected into segments. A segment consisted of two vertebrae with the ligaments and the intervertebral disc intact, and the muscle, nervous, and cardiovascular tissues removed. A custom built fixture was built to test each specimen three times in flexion and extension at two rotation rates: a low rate (one degree per second) and a high rate (500 degrees per second). To avoid damaging the specimens after the first test, the segments were only rotated up to ten degrees for the segments at the C2-C3 through C5-C6 level, and up to eight degrees for the C6-C7 and C7-T1 level. The segment response was represented by plots of the moment against the angle of rotation in the sagittal plane. The segment models were simulated at the same low and high rotation rates, and the model results were evaluated against the experimental response. The low speed experimental results were compared to existing quasi-static studies, but there was not an elevated rotation rate study at each segment level to compare with the high rate response. The segment response from the existing data was generally weaker than the results of this thesis because the earlier studies tested older specimens, and the exiting studies applied a step-wise loading protocol instead of a continuous one. A statistical analysis was conducted to determine the significance of the difference between the low and high rate experimental response. At the maximum angle of rotation, the analysis found moderate evidence (p < 0.05) of increased segment stiffness at the high rotation rate for the C5-C6 and C6-C7 segments in flexion and extension, and weak evidence of increased stiffness for the C3-C4 and C4-C5 segments in flexion and extension, and for the C2-C3 and C7-T1 segments in extension. Below six degrees of rotation, there was no statistical evidence that the low and high speed responses were significantly different for any segment. In flexion, the model response was within one standard deviation of the experimental mean at the C6-C7 and C7-T1 segment level. For the C2-C3 through C5-C6 segment levels, the model was stiffer than the experimental mean. In extension, the model was within one standard deviation at every segment level except at the C2-C3 and C7-T1 segment levels where the model response was weaker than the experimental response. For the high rate model analysis, the model predicted that the high rate simulations were stiffer than the low rate simulation at every segment level; however the difference was much greater in flexion than in extension. Recommendations for further research included studying the high rate behaviour of the intervertebral discs under compressive and bending loading, and investigating the translational and rotational displacement of the spine during flexion and extension and compare the results with the model. The procurement of more post mortem human subjects would increase the sample size and it could improve the significance of the statistical analysis, and additional spines would permit the analysis of other effects, such as the influence of gender.