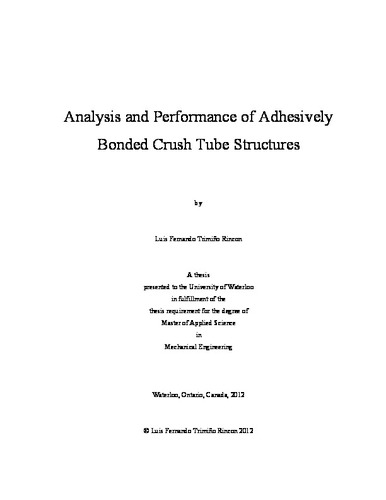 Lighter structural and energy absorbing materials are essential to increase fuel efficiency in transportation systems and have provided a motivation to investigate the use of new joining techniques based on the use of high strength and high tenacity adhesives. Current joining techniques, such as spot-welding, limit the possible weight reduction that can be achieved if lighter sections, dissimilar materials and/or novel geometries were to be used. Adhesive materials can address many limitations of current joining techniques. To take advantage of the available numerical codes for the simulation of bonded structures during dynamic crash events, a constitutive model for structural adhesive material using cohesive elements was assembled from the measured properties of two structural adhesives; DP-460NS and EC-2214 (3M, Canada). To verify that the proposed cohesive model accurately describes the behavior of the materials a two stage approach was used. First, a cohesive element formulation of the adhesive material was implemented to investigate a Double Cantilever Beam (DCB) (ASTM test D3433-99). The results of the simulation were compared against available experimental data. Second, using sub-size crush tube structures assembled from steel sections that were adhesively bonded, quasi-static and impact events were performed. The results from the experiment were compared against the numerical simulation of the same structure using cohesive elements to describe the adhesive joint. Later, Tie-Breaks were implemented to reduce computational times. Both types of elements successfully represented the adhesive joint and the numerical model of the crush tube was in good agreement with the overall load-displacement behavior of the experimental crush tubes. The use and testing of sub-size structures not only permitted the validation of the numerical models; it also investigated the feasibility of adhesive-only joints in automotive structures that may be exposed to crash scenarios. Sub-sized tubes were used due to equipment capacity limits, but an analysis was undertaken to demonstrate appropriate structural scaling. Even though the results between the experiments and the simulations were in very good agreement, it is clear that current cohesive material models and Tie-Breaks cannot incorporate strain rate effects, which may be important under dynamic impact conditions. Although testing in the literature has reported that the mechanical properties of the bond are affected by the properties of the joined materials as well as the geometry of the joint, these effects in the case of crush tube structures seem perhaps negligible in view of the simulation results.