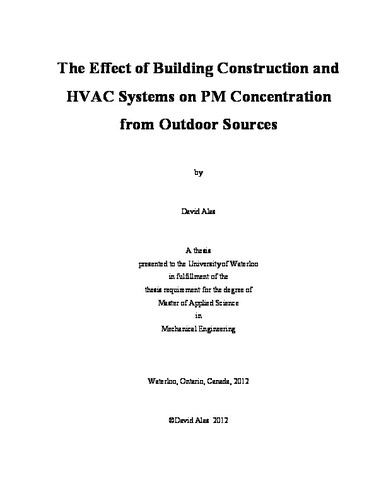 Adverse health effects of human exposure to particulate matter (PM) in indoor environments and the associated costs have been of interest in recent studies conducted outside Canada. It was, therefore, necessary to investigate these effects in a Canadian environment. This study investigated the effects of building construction and Heating, Ventilation, and Air Conditioning (HVAC) systems on the indoor concentration of airborne PM of outdoor origin and the related health impacts and cost savings in Ontario. Due to the complexity of the investigation, the study has been limited to the metropolitan areas of Toronto and Hamilton which represent much of the population of Ontario and a significant portion of all Canada. The main objective of the cost-benefit analysis (CBA) was to analyze and evaluate the effects of pollution in monetary equivalents. The modeling integrated the various models using the Impact Pathway Approach. The approach consisted of four steps: First, identify the sources and emissions of PM. Although the study focused on indoor environments, outdoor sources such as incomplete combustion from rush hour traffic were identified for the geographical areas of the study. Secondly, evaluate the dispersion or the concentration of PM on the site of interest. In order to achieve this goal, building modeling was first established that was applicable to Ontario. There were three homes and two commercial building scenarios: Existing homes (resExist), new homes constructed under minimum building code requirements (resBC), and under R2000 standard (resR2000); commercial buildings with 40% (school40) and 85% (school85) ASHRAE air filters. Air flow rates were calculated from building and HVAC sizing calculations. These flow rates were used to calculate input parameters for well-established mass balanced indoor PM concentration models. In addition, indoor exposure needed to account for time activity in each micro-environment in Ontario. This was accomplished by using time-weighted exposure modeling. Thirdly and lastly in the Impact Pathway Approach, evaluate the health impact and its monetary equivalent, respectively. In order to evaluate the health effects and monetary equivalents, the study considered fourteen retrofit cases which consisted of improving factors such as building construction, distribution system, and air filtration efficiency. Because input parameters were selected from data applicable to Ontario, the study provided a model setup that could be applied to future work in Canada. The study demonstrated that Canadian building construction provided significant protection from time-weighted PM exposure (Toronto, ambient vs. resExist/school40win, PM2.5 10.00 vs. 4.20 μg/m3). For this scenario, the prevented attributable number of cases (ANCs) was 721 for Toronto related to equivalent PM10. Cost savings due to building envelope protection of mortality alone much outweighed costs in investment scenario for new home construction (Toronto, $1,671 million vs. $21.6 million). Therefore, recommendations were made to invest in home construction. Similarly, the morbidity effects were very significant, especially for chronic bronchitis endpoints which were along the same magnitude as mortality for most of the cases. Similar results were obtained for Hamilton in proportion to their relative population at risk. In addition, Canadian building construction and HVAC systems showed larger time-weighted PM exposure in the summer compared to the winter conditions due to the various HVAC operating conditions such as air flow rates (Toronto, resExist/school40sum, PM2.5 5.18 μg/m3 ; resExist/school40win, PM2.5 4.20 μg/m3). Furthermore, cost savings from retrofits from existing home to forced air with air filtration were very significant. It was demonstrated that the cost savings related to reduction of equivalent PM10 exposure due to mortality alone much outweighed costs in retrofit investment scenarios (R2000, Toronto, $574 million vs. $4.96 million). Therefore, the government would be wise to promote more energy efficient homes by offering more incentive programs. Factors such as wall insulation, air flow rate changes of less than 600cfm, and HRV installation type did not played a major role. In addition, the effect of air filtration was more intense in homes compared to commercial buildings. Similarly, the impact of simultaneously retrofitting both, homes and commercial buildings, where children and adults spent most of the daily activities produced the greatest reduction of outdoor PM exposure. Installing high efficient air filtration in both homes and commercial buildings resulted in optimal reduced effects. The cost savings from the retrofit due to mortality alone much outweighed the investment scenario costs justifying the retrofit (Toronto, $470 million vs. $1.8 million). This demonstrated that PM concentration exposure reduction is a collective effort that needed to be regulated not only in ambient air level but in the work environment and in homes as well. It was identified that results were limited to model assumptions and input parameter data used. Since some of the parameters used, such as ambient PM concentrations, were average values, the results may not represent the exact actual conditions. Nevertheless, they provided a starting point since they were tailored to Ontario. Therefore, this study provided model simulation data that related to the Canadian environment having many factors in common such as weather, building construction, building systems, and government regulations. Therefore, the results are part of useful data for policy decisions as well as a starting point for future related work.