Neck Response in Out of Position Rear Impact Scenarios 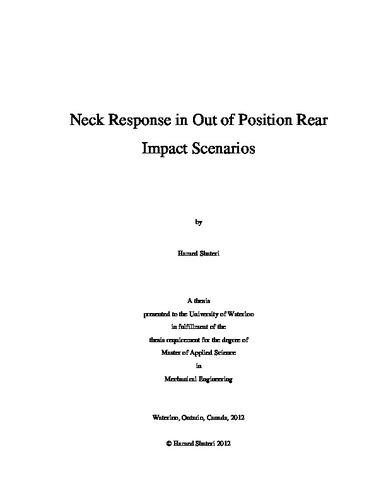 Whiplash injuries occur in automotive crashes and may cause long term health issues such as headache, neck pain, and visual and auditory disturbance. Whiplash-Associated Disorders are very costly and can impair the quality of human lives. Most studies focus on whiplash injuries that occur in neutral position head postures, although there is some evidence in the literature that non-neutral head posture can significantly increase the persistence of symptoms on patients. Crash dummies have limited biofidelity particularly for out-of-position scenarios and the current neck injury criteria were not derived for situations at which the head motion is not through the sagittal plane. Therefore Finite Element Methods provide an important tool that can be used to predict injury in different impact scenarios. The Finite Element model which was used for this study was previously developed at the University of Waterloo representing a 50th percentile male. The model had been previously validated at the segment level in extension, flexion, tension, and axial rotation. The full cervical spine model was validated in frontal and rear impact as well as tension. Since the final validation of the model, the ligament properties of the upper cervical spine and the muscle implementations had been improved to enhance the biofidelity of the model. To further improve the model, the addition of laxities to the ligaments of the upper cervical spine was studied. Several studies were performed based on the experiments in the literature to determine appropriate laxities for the upper cervical spine model. First, the laxities of -2 to 4 mm on all the ligaments were studied on the segment level of the model to find their effect on the failure force and displacement to failure in extension, flexion, tension, and axial rotation. The model development then went through a series of iterations in order to achieve laxity values that satisfied the failure force and displacement to failure reported in the literature for the four loading cases. Finally the laxities were used on a full cervical spine model and tested in physiological range of motion in extension, flexion, axial rotation, and lateral bending. The laxities were optimized using an iterative process. The results of this study provided laxity values that were acceptable in both segments level failure study and full cervical spine physiological range of motion study. The model was also validated against literature in impact scenarios. Using a cadaver experiment of 7 g rear impact, the global kinematics of the cervical spine was verified against the literature. The model provided good agreement with the head kinematics and relative rotations between the vertebrae for the cadaver tests. An 8 g rear impact cadaver test was used to validate the ligament strains and disc shear strains. For the anterior longitudinal ligament, the capsular ligament, and the disc shear strains, the model results were within one standard deviation of the literature in the majority of cervical spine regions that were reported. The model was also validated against volunteer low severity rear impact to verify the active musculature in the cervical spine. The head kinematics was generally within the boundaries that were reported by the literature. The model was compared to an experiment that used cadavers to investigate non-neutral rear impact scenarios. This experiment used cables and springs to replicate the passive behaviour of the musculature. The model showed good agreement with the extension and axial rotation results in both head kinematics and relative vertebrae rotations. The flexion and lateral bending results were not similar to the experimental data; attributed to the difference in muscle implementation between the two models. A total of 24 simulations were completed to find the effect of impact severity, axial rotation, and muscle activations on ligament strains during out-of-position rear impacts. The results illustrated that in general, ligament strains increased with the severity of impact and decreased with muscle activation. In out-of-position scenarios, the strains increased in some of the ligaments. An increase to the ligament strain as a result of non-neutral posture was mostly visible in the capsular ligaments of the upper cervical spine. The alar ligament and the apical ligaments of the upper cervical spine may fail in out-of-position at high rear impact scenarios. Recommendations for future work on the cervical spine Finite Element model includes the validation of the musculature and the usage of the muscles to rotate the head to a desired position to improve the biofidelity of the model and the results in out-of-position rear impacts. Further optimization of the laxities of the upper cervical spine can increase the biofidelity in this region. The modeling of the vertebral arteries into the FE model can help investigate whether out-of-position can increase the chance of injury of this region. The effect of flexion, extension, lateral bending, and their combination with axial rotation and the study of frontal and side impacts can be helpful in design of safer headrests for vehicles.