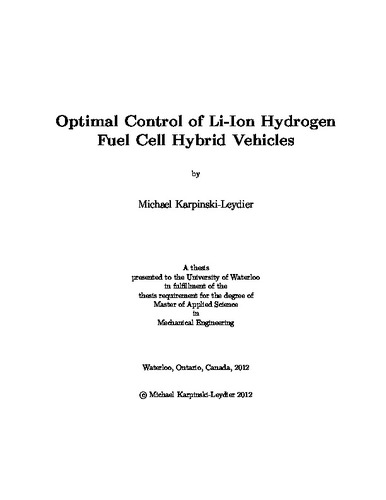 Hydrogen fuel cells are poised to become the next major power generation technology for the automotive industry. Fuel cell hybrid vehicles have similar power trains to conventional series hybrid electric vehicles. The underlying hybrid control concepts used for conventional hybrid vehicles are still valid although it is unknown how well they will perform on fuel cell based vehicles since the fuel cell is a fundamentally different power source. This thesis reviews several control strategies for fuel cell vehicles including a mode switching rule-based control strategy, a constant fuel cell output strategy and an adaptive variation of the equivalent consumption minimization strategy (A-ECMS) which has been modified for fuel cell vehicles. These strategies are implemented in simulation and evaluated against optimal strategies. The optimal strategies have been determined using convex optimization problem solving techniques. The mode switching and constant fuel cell strategies have also been evaluated in real world testing on a fully functional, road safe, fuel cell powered SUV. The test vehicle was designed and built by the University of Waterloo Alternative Fuels Team (UWAFT) for the EcoCAR competition. The simulation results demonstrate that near optimal fuel economies can be achieved through operating the fuel cell at near peak efficiency while the battery manages all major transients in the power demand. The constant fuel cell strategy demonstrates the highest fuel economy of all the tested strategies since it operates continually within this high efficiency region. The mode based strategy showed the worst results since the fuel cell would follow the transients of the power demand, pushing it out of the peak efficiency region. The simulation results were validated by the experimental results which showed similar relationships. The A-ECMS provided good results although they were lower than the constant fuel cell strategy. Hydrogen fuel cell vehicles have the real potential to become the next major vehicle technology. Only by continuing to research every aspect of these vehicles needed to make them viable for consumer use can these vehicles ever replace the gasoline powered vehicles we use today.