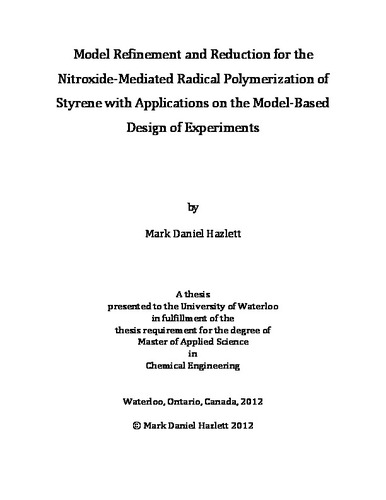 Polystyrene (PS) is an important commodity polymer. In its most commonly used form, PS is a high molecular weight linear polymer, typically produced through free-radical polymerization, which is a well understood and robust process. This process produces a high molecular weight, clear thermoplastic that is hard, rigid and has good thermal and melt flow properties for use in moldings, extrusions and films. However, polystyrene produced through the free radical process has a very broad molecular weight distribution, which can lead to poor performance in some applications. To this end, nitroxide-mediated radical polymerization (NMRP) can synthesize materials with a much more consistently defined molecular architecture as well as relatively low polydispersity than other methods. NMRP involves radical polymerization in the presence of a nitroxide mediator. This mediator is usually of the form of a stable radical which can bind to and disable the growing polymer chain. This will “tie up” some of the free radicals forming a dynamic equilibrium between active and dormant species, through a reversible coupling process. NMRP can be conducted through one of two different processes: (1) The bimolecular process, which can be initiated with a conventional peroxide initiator (i.e. BPO) but in the presence of a stable nitroxide radical (i.e. TEMPO), which is a stable radical that can reversibly bind with the growing polymer radical chain, and (2) The unimolecular process, where nitroxyl ether is introduced to the system, which then degrades to create both the initiator and mediator radicals. Based on previous research in the group, which included experimental investigations with both unimolecular and bimolecular NMRP under various conditions, it was possible to build on an earlier model and come up with an improved detailed mechanistic model. Additionally, it was seen that certain parameters in the model had little impact on the overall model performance, which suggested that their removal would be appropriate, also serving to reduce the complexity of the model. Comparisons of model predictions with experimental data both from within the group and the general literature were performed and trends verified. Further work was done on the development of an additionally reduced model, and on the testing of these different levels of model complexity with data. The aim of this analysis was to develop a model to capture the key process responses in a simple and easy to implement manner with comparable accuracy to the complete models. Due to its lower complexity, this substantially reduced model would me a much likelier candidate for use in on-line applications. Application of these different model levels to the model-based D-optimal design of experiments was then pursued, with results compared to those generated by a parallel Bayesian design project conducted within the group. Additional work was done using a different optimality criterion, targeted at reducing the amount of parameter correlation that may be seen in D-optimal designs. Finally, conclusions and recommendations for future work were made, including a detailed explanation of how a model similar to the ones described in this paper could be used in the optimal selection of sensors and design of experiments.

Mark Daniel Hazlett (2012). Model Refinement and Reduction for the Nitroxide-Mediated Radical Polymerization of Styrene with Applications on the Model-Based Design of Experiments. UWSpace. http://hdl.handle.net/10012/7024