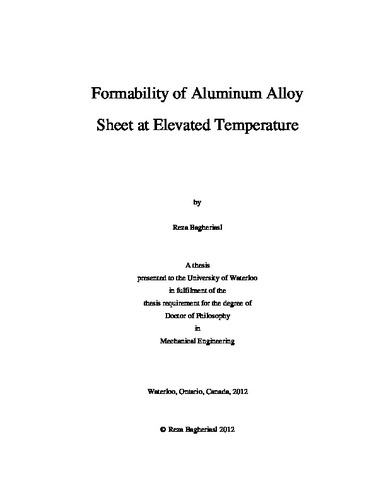 An experimental and numerical study of the isothermal and non-isothermal warm formability of an AA3003 aluminum alloy brazing sheet is presented. Forming limit diagrams were determined using warm limiting dome height (LDH) experiments with in situ strain measurement based on digital image correlation (DIC) techniques. Forming limit curves (FLCs) were developed at several temperature levels (room temperature, 100ºC, 200ºC, 250ºC, and 300ºC) and strain-rates (0.003, 0.018, and 0.1s-1). The formability experiments demonstrated that temperature has a significant effect on formability, whereas forming speed has a mild effect within the studied range. Elevating the temperature to 250C improved the formability more than 200% compared to room temperature forming, while forming at lower speeds increased the limiting strains by 10% and 17% at room temperature and 250ºC, respectively. Non-isothermal deep draw experiments were developed considering an automotive heat exchanger plate. A parametric study of the effects of die temperature, punch speed, and blank holder force on the formability of the part was conducted. The introduction of non-isothermal conditions in which the punch is cooled and the flange region is heated to 250C resulted in a 61% increase in draw depth relative to room temperature forming. In order to develop effective numerical models of warm forming processes, a constitutive model is proposed for aluminum alloy sheet to account for temperature and strain rate dependency, as well as plastic anisotropy. The model combines the Barlat YLD2000 yield criterion (Barlat et al., 2003) to capture sheet anisotropy and the Bergstrom (1982) hardening rule to account for temperature and strain rate dependency. Stress-strain curves for AA3003 aluminum alloy brazing sheet tested at elevated temperatures and a range of strain rates were used to fit the Bergstrom parameters, while measured R-values were used to fit the yield function parameters. The combined constitutive model was implemented within a user defined material subroutine that was linked to the LS-DYNA finite element code. Finite element models were developed based on the proposed material model and the results were compared with experimental data. Isothermal uniaxial tensile tests were simulated and the predicted responses were compared with measured data. The tensile test simulations accurately predicted material behaviour. The user material subroutine and forming limit criteria were then applied to simulate the isothermal warm LDH tests, as well as isothermal and non-isothermal warm deep drawing experiments. Two deep draw geometries were considered, the heat exchanger plate experiments developed as part of this research and the 100 mm cylindrical cup draw experiments performed by McKinley et al. (2010). The strain distributions, punch forces and failure location predicted for all three forming operations were in good agreement with the experimental results. Using the warm forming limit curves, the models were able to accurately predict the punch depths to failure as well as the location of failure initiation for both the isothermal and non-isothermal deep draw operations.