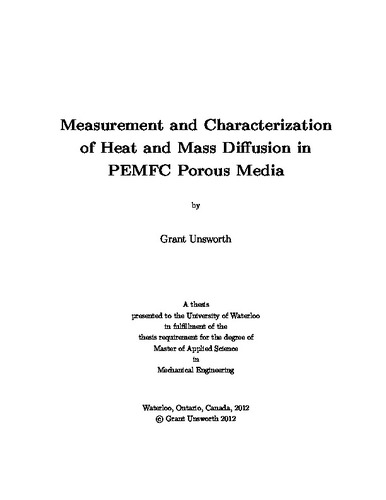 A single polymer electrolyte membrane fuel cell (PEMFC) is comprised of several sub-millimetre thick layers of varying porosity sandwiched together. The thickness of each layer, which typically ranges from 10 to 200μm, is kept small in order to minimize the transport resistance of heat, mass, electrons, and protons, that limit reaction rate. However, the thickness of these materials presents a significant challenge to engineers characterizing the transport properties through them, which is of considerable importance to the development and optimization of fuel cells. The objective of this research is to address the challenges associated with measuring the heat conduction and gas diffusion transport properties of thin porous media used in PEMFCs. An improvement in the accuracy of the guarded heat flow technique for measuring thermal conductivity and the modified Loschmidt Cell technique for measuring gas diffusivity are presented for porous media with a sub-millimetre thickness. The improvement in accuracy is achieved by analyzing parameters in each apparatus that are sensitive to measurement error and have the largest contribution to measurement uncertainty, and then developing ways to minimize the error. The experimental apparatuses are used to investigate the transport properties of the gas diffusion layer (GDL) and the microporous layer (MPL), while the methods would also be useful in the study of the catalyst layer (CL). Gas diffusion through porous media is critical for the high current density operation of a PEMFC, where the electrochemical reaction becomes rate-limited by the diffusive flux of reactants reaching reaction sites. However, geometric models that predict diffusivity of the GDL have been identified as inaccurate in current literature. Experimental results give a better estimate of diffusivity, but published works to date have been limited by high measurement uncertainty. In this thesis, the effective diffusivity of various GDLs are measured using a modified Loschmidt cell and the relative differences between GDLs are explained using scanning electron microscopy and the method of standard porosimetry. The experimental results from this study and others in current literature are used to develop a generalized correlation for predicting diffusivity as a function of porosity in the through-plane direction of a GDL. The thermal conductivity and contact resistance of porous media are important for accurate thermal analysis of a fuel cell, especially at high current densities where the heat flux becomes large. In this thesis, the effective through-plane thermal conductivity and contact resistance of the GDL and MPL are measured. GDL samples with and without a MPL and coated with 30%-wt. PTFE are measured using the guarded steady-state heat flow technique described in the ASTM standard E 1225-04. Thermal contact resistance of the MPL with the iron clamping surface was found to be negligible, owing to the high surface contact area. Thermal conductivity and thickness of the MPL remained constant for compression pressures up to 15bar at 0.30W/m°K and 55μm, respectively. The thermal conductivity of the GDL substrate containing 30%−wt. PTFE varied from 0.30 to 0.56W/m°K as compression was increased from 4 to 15bar. As a result, the GDL contain- ing MPL had a lower effective thermal conductivity at high compression than the GDL without MPL. At low compression, differences were negligible. The constant thickness of the MPL suggests that the porosity, as well as heat and mass transport properties, remain independent of the inhomogeneous compression by the bipolar plate. Despite the low effective thermal conductivity of the MPL, thermal performance of the GDL can be improved by exploiting the excellent surface contact resistance of the MPL while minimizing its thickness.