Coordinated Landing and Mapping with Aerial and Ground Vehicle Teams 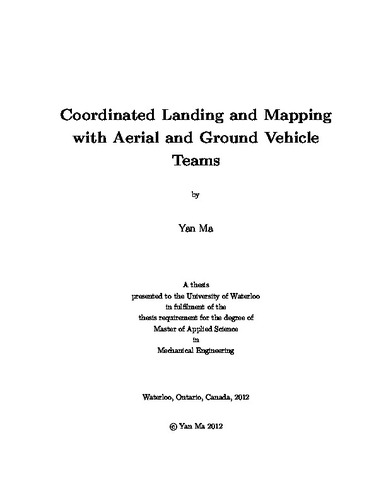 Micro Umanned Aerial Vehicle~(UAV) and Umanned Ground Vehicle~(UGV) teams present tremendous opportunities in expanding the range of operations for these vehicles. An effective coordination of these vehicles can take advantage of the strengths of both, while mediate each other's weaknesses. In particular, a micro UAV typically has limited flight time due to its weak payload capacity. To take advantage of the mobility and sensor coverage of a micro UAV in long range, long duration surveillance mission, a UGV can act as a mobile station for recharging or battery swap, and the ability to perform autonomous docking is a prerequisite for such operations. This work presents an approach to coordinate an autonomous docking between a quadrotor UAV and a skid-steered UGV. A joint controller is designed to eliminate the relative position error between the vehicles. The controller is validated in simulations and successful landing is achieved in indoor environment, as well as outdoor settings with standard sensors and real disturbances. Another goal for this work is to improve the autonomy of UAV-UGV teams in positioning denied environments, a very common scenarios for many robotics applications. In such environments, Simultaneous Mapping and Localization~(SLAM) capability is the foundation for all autonomous operations. A successful SLAM algorithm generates maps for path planning and object recognition, while providing localization information for position tracking. This work proposes an SLAM algorithm that is capable of generating high fidelity surface model of the surrounding, while accurately estimating the camera pose in real-time. This algorithm improves on a clear deficiency of its predecessor in its ability to perform dense reconstruction without strict volume limitation, enabling practical deployment of this algorithm on robotic systems.