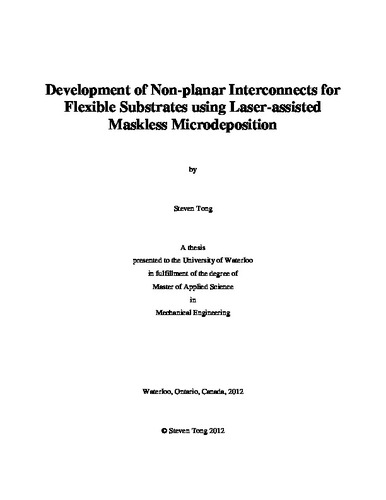 With the industry striving for smaller devices, new technologies are developed to further miniaturize electronics devices. To this end, realization of 3D/non-planar interconnects, which aim at miniaturizing the interconnects formed between components on the same device, has attracted many researchers. This thesis focuses on a feasibility analysis for developing non-planar interconnects on various flexible substrates using laser assisted maskless microdeposition (LAMM), which is a pressure-less process. There are two types of flexible substrates that are used: double-sided copper substrates separated by a layer of polyethylene terephthalate (PET) as well as a polyethylene terephthalate flexible substrate with surface-mounted resistors. For both substrates, multiple types of experiments were conducted to discover procedures which result in the highest rate of success for forming conductive interconnects. Optimal process parameters and deposition techniques were determined after multiple experiments. After experiments were completed, the resultant substrates were subject to various characterization methodologies including optical and scanning electron microscopy, energy-dispersive X-ray spectroscopy, X-ray diffraction and profilometery. The results of these methodologies are documented in this thesis. After many types of experiments involving substrate manipulation of the double-sided copper substrates, it was shown that the silver nano-particles were more likely to form a conductive interconnect when a polished slant was fabricated on the substrate. Many deposition patterns were used for the flexible substrates with surface-mounted resistors. Of these patterns, the two patterns, the ‘zigzag’ and ‘dot solder’ patterns, proved to have a much higher success rate for creating conductive interconnects compared to the other patterns. During this study, the results of the experiments using the LAMM process show that this technology has great potential for creating non-planar interconnects on flexible substrates. The experiments however suggest that the process is very sensitive to the material composition and process parameters. As such, with a small change in parameters, the 3D interconnects can fail to be produced. It was also observed that the possibility of silver interconnect fractures is higher where dissimilar materials with different thermal expansion rates are used for the underlying substrates.