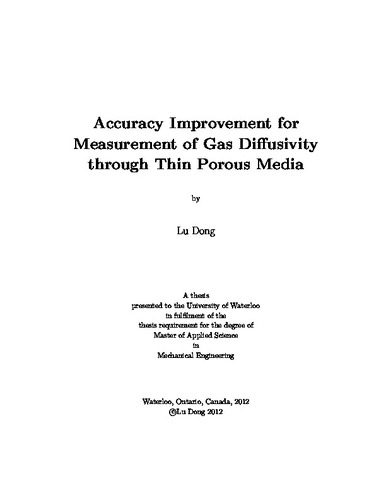 Accurate measurement of the gas diffusion coefficient through porous media is of significant interest to science and engineering applications including mass transfer through soils, building materials, and fuel cells to name a few. Accurate measurements are necessary for simulation and optimization of complex systems involving gas transport. The Loschmidt cell, or closed tube method has been extensively used to measuring the binary gas diffusion coefficient of gas pairs. Recent studies have used a modified Loschmidt cell with an additional porous sample to measure the effective diffusion coefficient through the porous sample. The method employs what is called the resistance network method for calculating the effective diffusion coefficient through the porous sample. In this study, a one-dimensional simulation was developed to evaluate the accuracy of the resistance network method with a modified Loschmidt cell. Dimensionless parameters are shown to be applicable for both the conventional Loschmidt cell as well as the modified Loschmidt cell with the porous sample. A parametric simulation study was performed to show that the error relates closely to the ratio of diffusive resistances of the sample and bulk gas denoted as the resistance ratio, Ω*. With a simulated experimental duration of 250s, which is typical of experiments in literature, the error was found to be negligible when Ω* < 0.1 but increased dramatically for Ω* > 0.1 up to a maximum of approximately 20% error. The equivalent Fourier number, Fo_eq, based on the equivalent diffusivity, D_eq, was proposed as an approximate expression for the degree to which the concentration gradient in the test cell has evolved. It was found that the error has nearly a linear relationship with Fo_eq. Since a lower Fo_eq means a less decayed profile with significant transience remaining, as Fo_eq drops, the the error increases. By controlling the simulation test length for different thickness and diffusivity samples such that Fo_eq = 12.5, the error was reduced to less than 1% over most of the range of parameters and less than 6% over the full range of parameters spanning two orders of magnitude for both thickness and diffusivity. The resistance network method requires the measurement of the sample thickness, a diffusion length, and two diffusion coefficients using with the modified Loschmidt cell (one with the porous sample and one without). Analysis found that the equation used for calculating the effective diffusion coefficient, D_eff, through the porous sample inherently magnifies the relative uncertainty of the measured values in the final calculated value for D_eff. When Ω* < 1, the percentage uncertainty in both diffusion coefficient measurements could potentially be magnified by one or more orders of magnitude. To mitigate uncertainty in D_eff, Ω* must be greater than 1 to ensure that the uncertainty is magnified by no more than a factor of 2. This study recommends that modified Loschmidt experiments aim for Ω* = 1 and Fo_eq = 12.5 to greatly reduce the error and uncertainty in the measurement of D_eff.