Effects of Anti-Icing Agents on the Mechanical Properties of Concrete 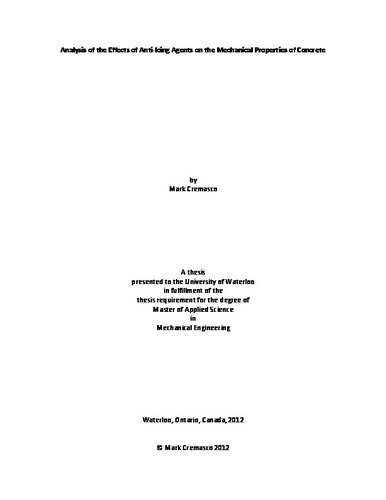 Anti-icing agents are applied to road surfaces to prevent ice formation and to melt any hail or snow as it falls. The specific agent is selected to provide optimum anti-icing properties for the particular local climate in different municipalities taking into account cost, availability and properties. These anti-icing agents are generally applied in liquid form, and due to their low freezing temperatures, are able to remain liquid at the low ambient temperatures. Unfortunately, the negative aspect of the use of liquid agents is that they are able to penetrate concrete structures to a greater extent than can the solid de-icers, such as rock salt. Once the chloride solutions penetrate the concrete, they can have serious deleterious effects on both the reinforcing steel as well as the concrete [1]. It has been shown in previous studies that the cations of the solutions will tend to react with the cementitious materials to form precipitates of expansive nature. More specifically, the reaction of CaCl2 with Ca(OH)2 results in the formation of expansive calcium hydroxy-chloride [2]. The reaction of MgCl2 with Ca(OH)2 forms Mg(OH)2 in the capillary pores with CaCl2 as a by-product after which the MgCl2 can react with the calcium-silicate-hydrate to form magnesium-silicate-hydrate – a gel-like material with no inherent binding properties or strength. The calcium hydroxy-chloride and Mg(OH)2 precipitates can have a positive effect at early onset, but will eventually cause deterioration of concrete due to the internal forces applied by the precipitates as their volume increases. This can affect the strength and create notable interior strain in the concrete. There are a number of mechanical properties that can be analyzed using short-term testing that will help to determine any changes occurring due to salt solution exposure. To gain a general understanding of the effects of the salt solution exposure in this project, compressive strength, tensile strength, elastic modulus, and strain were measured using a number of exposure conditions. While the results of testing confirm that there are initial benefits beyond minimizing ice formation and bonding, there ultimately exist a number of concerns with respect to the reactions that occur between the salts and hardened cement paste. Although the formation of calcium hydroxy-chloride is known to be expansive [3], evidence of this compound was only seen indirectly through elevated strain and micro-cracking. There was no deterioration of compressive strength, tensile strength, or elastic modulus over the short-term testing. Similarly, and again due to the short testing period, the formation of magnesium-silicate-hydrate (M-S-H) is unlikely to have occurred, though its formation during long-term exposure can result in complete loss of binding strength [2]. However, the precipitation of Mg(OH)2 is believed to be responsible for the lower chloride diffusion rate as well as the increase in strength of the concrete exposed to MgCl2. The only agent which did not yield changes of concern with respect to concrete is the NaCl solution while CaCl2 produced the most deleterious effects.