Modeling and Control of a Magnetic Drug Delivery System 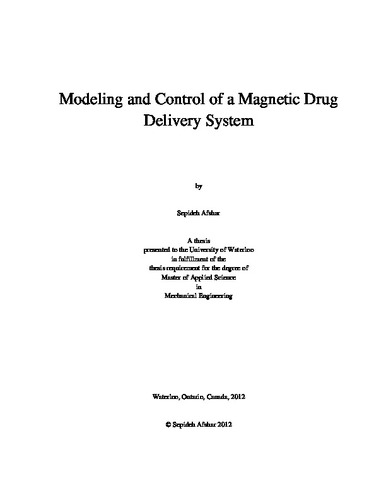 Therapeutic operation risk has been reduced by the use of micro-robots, allowing highly invasive surgery to be replaced by low invasive surgery (LIS), which provides an effective tool even in previously inaccessible parts of the human body. LIS techniques help delivering drugs effectively via micro-carriers. The micro-carriers are divided into two groups: tethered devices, which are supported by internally supplied propulsion mechanism, and untethered devices. Remote actuation is the critical issue in micro-device navigation, especially through blood vessels. To achieve remote control within the cardiovascular system, magnetic propulsion offers an advantage over other proposed actuation methods. In the literature, most research has focused on micro-device structural design, while there is a lack of research into design and analysis of combined structure and control. As the main part, integrating the principle of electromagnetic induced force by feedback control design will lead to the desired automatic movement. An actuator configuration should thus first be designed to initiate the desired force. The design is basically defining the type and placement of a set of coils to achieve an operational goal. In this project, the magnetic actuation is initiated by a combination of four electromagnets and two sets of uniform coils. Preliminary studies on 2D navigation of a ferromagnetic particle are used to show the effect of actuator structure on controller performance. Accordingly, the performance of the four electromagnets combination is compared to the proposed augmented structure with uniform coils. The simulation results show the improved efficiency of the augmented structure. In more general cases, the arrangement and number of electromagnets are unknown and should be defined. An optimization method is suggested to find these variables when the working space is maximized. Finally, the problem of robust output regulation of the electromagnetic system driven by a linear exosystem, is also addressed in this project. The exosystem is assumed to be neutrally stable with unknown frequencies. The parallel connection of two controllers, a robust stabilizer and an internal model-based controller, is presented to eliminate the output error. In the latter one, an adaptation is used to tune the internal model frequencies such that a steady-state control is produced to maintain the output-zeroing condition. The robust regulation with a local domain of convergence is achieved for a special class of decomposable MIMO nonlinear minimum-phase system. The simulation results show the effectiveness and robustness of this method for the electromagnetic system when two different paths are considered.