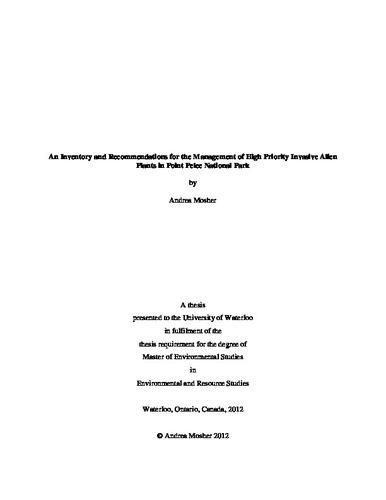 Point Pelee National Park in Ontario, Canada has been affected by a long history of human activity. This activity has encouraged the establishment of approximately 276 exotic invasive plant species. These plants decrease biodiversity and effective function of ecosystems within the Park. A 5 Year Exotic Plant Species Management Plan for the Park was written in 1990. Since that time inventories have been done on some of the species but a monitoring of all the high priority exotic invasive plants has not. As part of this study an inventory of the high priority exotic invasive plants and their spatial extent in the Park, was created. From May to September, 2011 a comprehensive inventory took place within a 5.5km stretch in the terrestrial area at the southern end of the Park. Systematic belt transects were performed, on foot, from west to east at 100 m intervals. Within the quadrats percent cover of each plant species was determined. The data collected in the field were compiled using geographic information systems (GIS), resulting in maps of the extent of the most abundant species studied. Analysis as part of this study included using the data to determine which plants and areas are higher priorities for management within the Park. Quadrats were analysed for diversity using the Simpson Index and, since the data was non-parametric, comparisons were made across diversity and native richness using the Kruskal Wallis test. Alliaria officinalis is the only non-native species that is widespread within the study area. Other non-native species with a high potential for invasiveness were observed but only consisted of a few individuals along roads and paths. Some non-native species were present along or near roads and paths in denser patches (17-100% plot coverage). Recommendations include removal of some non-native species deemed to be a potential threat to native richness and diversity, followed by re-vegetation with native species, and continued monitoring. Future restoration efforts are best directed at the area around DeLaurier, along west beach and at the Tip. These areas have the lowest diversity and native richness and therefore need the most improvement.