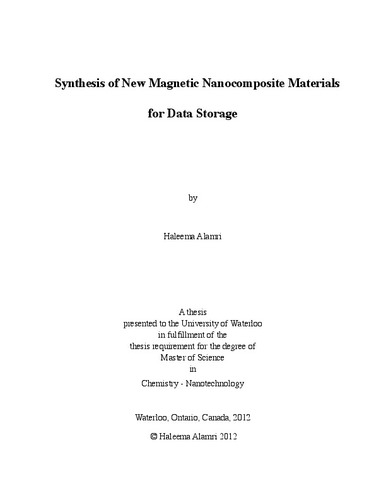 The confinement of magnetic nanoparticles (Prussian blue analogues (PBAs) has been achieved using mesostructured silica as a matrix. The PBAs have the general formula AxMy[M'(CN)n]z, where A is an alkali metal cation; M: CoII, NiII, SmIII; and M': CoII. The two reactions were run in parallel and led to a mesostructured silica matrix that contains nanoparticles of PBA homogeneously distributed within the silica framework. As initially reported for the synthesis of Co3[Fe(CN)6]2 magnetic nanoparticles, in the research conducted for this thesis, this synthesis has been extended to other compounds and to lanthanides such as Sm and has also included the study of the influence of different parameters (pH, concentration). As these nanocomposites are potentially good candidates for the preparation of bimetallic nanoparticles and oxides through controlled thermal treatment, the second goal of the research was to employ an adapted thermal treatment in order to prepare metal and metal oxide nanoparticles from PBA, directly embedded in the silica matrix. To this end, the influence of the thermal treatment (temperature, time, atmosphere) on the nature and structure of the resulting materials was investigated, with a focus on the potential use of the combustion of the organic templates as in-situ reducing agents. For some compounds, the preparation of bimetallic nanoparticles was successful. This method was tentatively applied to the preparation of specific Sm:Co bimetallic compounds, are well known as one of the best permanent magnets currently available.