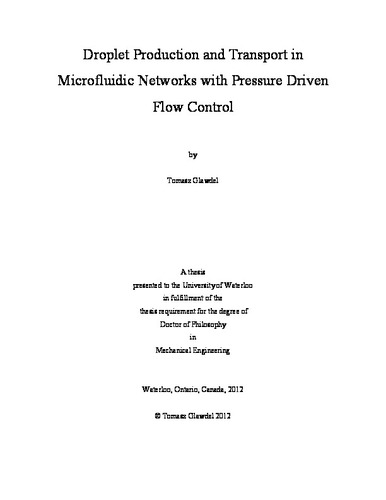 Droplet based microfluidics is a developing technology with great potential towards improving large scale combinatorial studies that require high throughput and accurate metering of reagents. Each droplet can be thought of as a miniature microreactor where complex reactions can be performed on the micro-scale by mixing, splitting and combining droplets. This thesis investigates the operation and control of droplet microfluidic devices operating using constant pressure sources to pump fluids where feedback from the droplets influences the overall performance of the device. For this purpose, a model system consisting of a single T-junction droplet generator and a single network node is used to understand how pressure source control effects droplet generation and transport through microfluidic networks. The first part of this thesis focuses on the generation of Newtonian liquid-liquid droplets from a microfluidic T-junction operating within the squeezing-to-transition regime with stable flow rates. An experimental study was performed to characterize the effects of geometry (height/width ratio, channel width ratio) and flow parameters (Capillary number, flow rate ratio, viscosity ratio) on the droplet size, spacing and rate of production. Three stages of droplet formation were identified (lag, filling and necking), including the newly defined lag stage that appears at the beginning of the formation cycle once the interface pulls back after a droplet detaches. Based on the experimental observations, a model was developed to describe the formation process which incorporates a detailed geometric description of the drop shape with a force balance in the filling stage and a control volume analysis of the necking stage. The model matches well with the experimental results as data falls within 10% of the predicted values. Subsequently, the effect of surfactants on the formation process was investigated. Surfactant transport occurs on a timescale comparable to the production rate of droplets resulting in dynamic interfacial tension effects. This causes strong coupling between the mass transport of surfactants and the drop production process. Using the previously defined force balance, the apparent interfacial tension at the end of the filling stage was measured. The results show that there is a significant deviation from the equilibrium interfacial tension at normal operating conditions for the T-junction generators due to the rapid expansion of the interface. A model was developed to calculate the dynamic interfacial tension for pre and post micellar solutions, which was then incorporated into the overall model for droplet formation in T-junction generators. Next, the behaviour of microfluidic droplet generators operating under pressure source control was investigated. Coupling between the changing interface and hydrodynamic resistance of the droplets and the flow rate of the two phases creates fluctuations in the output of the droplet generator. Oscillations were found to occur over the short term (one droplet formation cycle) and long term (many formation cycles). Two metrics were developed to quantify these oscillations. Short term oscillations were quantified by tracking droplet speed in the output channel and long term oscillation were quantified by measuring changes in droplet spacing. Analysis of experimental and numerical data shows that long term oscillations have a periodicity that matches the residence time of droplets in the system. A simple model is developed to determine the influence of Laplace pressure, droplet resistance, T-junction generator design and network architecture on the magnitude of these oscillations. From the model a set of design rules are developed to improve the overall operation of T-junction generators using pressure driven flow. The final part of this thesis studies the transport of droplets through a single microchannel junction under various geometric and flow conditions applied to the two outlet channels. Droplets alter the hydrodynamic resistance of the channel they travel within which creates a feedback effect where the decision of preceding droplets influences the trajectory of subsequent droplets. Multifaceted behaviour occurs where sometimes the trajectory of droplets follows a repeatable pattern and other times it is chaotic. As part of this work, a discrete analytical model was developed that predicts droplet transport through the junction including transitions between filtering and sorting, bifurcation in the patterns, composition of the patterns, and an estimation of when patterns will disintegrate into chaos. The model was validated by comparing it to compact numerical simulations and microfluidic experiments with good agreement.The complex behaviour of a simple junction emphasizes the challenge that remains for more highly integrated droplet microfluidic networks operating with pressure driven flow.