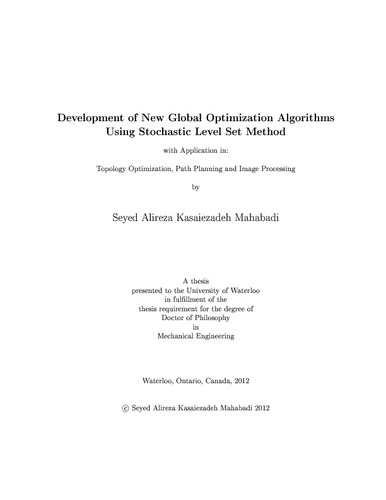 A unique mathematical tool is developed to deal with global optimization of a set of engineering problems. These include image processing, mechanical topology optimization, and optimal path planning in a variational framework, as well as some benchmark problems in parameter optimization. The optimization tool in these applications is based on the level set theory by which an evolving contour converges toward the optimum solution. Depending upon the application, the objective function is defined, and then the level set theory is used for optimization. Level set theory, as a member of active contour methods, is an extension of the steepest descent method in conventional parameter optimization to the variational framework. It intrinsically suffers from trapping in local solutions, a common drawback of gradient based optimization methods. In this thesis, methods are developed to deal with this drawbacks of the level set approach. By investigating the current global optimization methods, one can conclude that these methods usually cannot be extended to the variational framework; or if they can, the computational costs become drastically expensive. To cope with this complexity, a global optimization algorithm is first developed in parameter space and compared with the existing methods. This method is called "Spiral Bacterial Foraging Optimization" (SBFO) method because it is inspired by the aggregation process of a particular bacterium called, Dictyostelium Discoideum. Regardless of the real phenomenon behind the SBFO, it leads to new ideas in developing global optimization methods. According to these ideas, an effective global optimization method should have i) a stochastic operator, and/or ii) a multi-agent structure. These two properties are very common in the existing global optimization methods. To improve the computational time and costs, the algorithm may include gradient-based approaches to increase the convergence speed. This property is particularly available in SBFO and it is the basis on which SBFO can be extended to variational framework. To mitigate the computational costs of the algorithm, use of the gradient based approaches can be helpful. Therefore, SBFO as a multi-agent stochastic gradient based structure can be extended to multi-agent stochastic level set method. In three steps, the variational set up is formulated: i) A single stochastic level set method, called "Active Contours with Stochastic Fronts" (ACSF), ii) Multi-agent stochastic level set method (MSLSM), and iii) Stochastic level set method without gradient such as E-ARC algorithm. For image processing applications, the first two steps have been implemented and show significant improvement in the results. As expected, a multi agent structure is more accurate in terms of ability to find the global solution but it is much more computationally expensive. According to the results, if one uses an initial level set with enough holes in its topology, a single stochastic level set method can achieve almost the same level of accuracy as a multi-agent structure can obtain. Therefore, for a topology optimization problem for which a high level of calculations (at each iteration a finite element model should be solved) is required, only ACSF with initial guess with multiple holes is implemented. In some applications, such as optimal path planning, objective functions are usually very complicated; finding a closed-form equation for the objective function and its gradient is therefore impossible or sometimes very computationally expensive. In these situations, the level set theory and its extensions cannot be directly employed. As a result, the Evolving Arc algorithm that is inspired by "Electric Arc" in nature, is proposed. The results show that it can be a good solution for either unconstrained or constrained problems. Finally, a rigorous convergence analysis for SBFO and ACSF is presented that is new amongst global optimization methods in both parameter and variational framework.