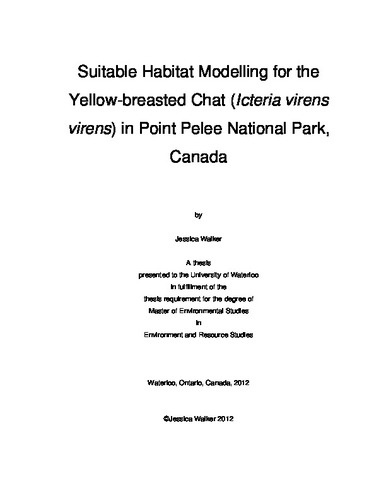 In order for conservation managers to preserve species within an area, an in-depth knowledge of the distributional patterns of focal species within a landscape is required. This is especially true when the species of concern is Threatened or Endangered and conservation of habitat is essential for species preservation. The yellow-breasted chat (Icteria virens virens) is one such species that is listed as Special Concern under the Species at Risk Act of Canada; the virens subspecies meets the criteria for Endangered. Populations within Canada are limited due the bird’s natural range, which extends north into the extreme southern part of Ontario. Point Pelee National Park is one of two strongholds for this species. However, populations within the park have been declining greatly over the past few years with a 70% rate of decline between 1982 and 2008 (n =10, n=3). This decline is likely due to the lack of natural disturbance such as fire, as well as land use change to agriculture and urbanization that has resulted in a decrease of suitable habitat, outside the park. To examine these hypotheses, habitat suitability modelling is a useful tool. It offers conservation managers insight into current distributions of species, especially species of concern. The purpose of this research was to examine environmental variables relating to three bird species and use these variables to model suitable habitat within the study site (Anders Field Complex). In my study, ArcMap 10 was used to model and map suitable habitat within the Anders Field Complex of Point Pelee National Park, as this is the last known nesting grounds for the yellow-breasted chat within the park. The willow flycatcher (Empidonax traillii) and the white-eyed vireo (Vireo griseus) were also studied as they fill a similar niche and therefore strengthen the results of the study. Environmental variables were modeled to predict suitable habitat and therefore predict potential species distribution. The model used predictors such as vegetation composition of breeding territories and nest patch vegetation composition to identify potential suitable habitat within the study site. Results of the models show that there is likely no suitable habitat (0.04 ha) available for the yellow-breasted chat within the complex. Some suitable habitat was available for the willow flycatcher but seemed limited within the study site (4.1 ha), while an absence of available data on nest scale vegetation characteristics rendered modelling of the white-eyed vireo’s habitat moot. Conditions within the Anders Field Complex have succumbed to succession resulting in mature conditions in vegetation structure and composition, as low dense shrub with high herbaceous cover is being replaced with tall thicket with very little ground cover. Height of vegetation has succeeded the requirements of the yellow-breasted chat. These results show that habitat succession and therefore the loss of suitable habitat is a likely factor influencing chat populations within the Anders Field Complex. There are also factors outside the park likely affecting chat distribution including habitat loss and fragmentation at the landscape scale. Management practices, such as the re-introduction of lost mechanisms or processes within the park should focus on a broad-scale ecological approach that considers novel thinking to restoring ecological integrity. Human induced influences including land use change and introduction of exotic species have forever changed conditions within and surrounding the park, therefore restoration should be mindful to new ecosystems, as restoring to past conditions is likely unproductive. Implementing a disturbance regime such as prescribed burnings, is recommended in order to restore a lost mechanism for the renewal of early-successional habitat. Concentrating on restoration of ecosystems and the re-establishment of a shifting mosaic will provide habitat for a plethora of species including the chat, which is legally mandated by law. However, restoring habitat for the chat will likely not result in the increase of chat abundance within the park until factors outside of the park, including habitat loss and fragmentation are rectified.