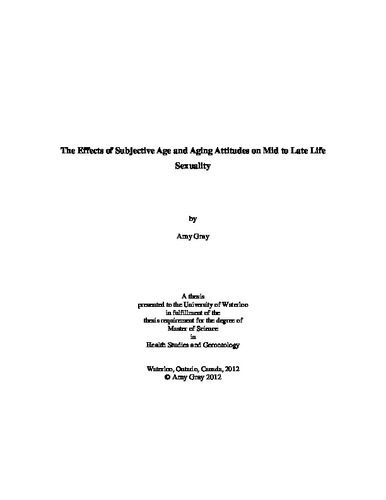 Sexuality is being recognized by the medical community as an increasingly important factor for well-being in older adults. Age and well-being are important factors that contribute to older adults’ sexuality. Subjective age and attitudes towards aging are known to impact physical and mental wellness for adults over 40. However, there is no research that looks at the impact of subject age and aging attitudes on older adult sexuality. This secondary analysis of longitudinal Mid-Life in the United States (MIDUS) study data will explore the relationship between subjective age and attitudes toward aging from MIDUS Wave I on sexual activity, frequency of sex, quality of sex, and interest in sex, among adults 40 and older from MIDUS Wave II. Data were analyzed to determine the relationship between the independent variables subjective age and aging expectations on the four dependent sexuality variables.The interaction terms subjective age by aging expectations, subjective age by gender, aging expectations by gender. A three way interaction between subjective age, aging expectations, and gender was also included in the analyses.Subjective age was significantly associated with quality of sex and interest in sex such that the older people felt, the less likely they were to rate their sex life positively or put much thought and/or effort into sex. Aging expectations were significantly associated with quality of sex such that the worse people felt about getting old, the less likely they were to have good quality sex later in life. Neither subjective age nor aging expectations had an impact on the behavioural variables number of sex partners and frequency of sex. None of the interaction terms tested were statistically significant. As such, people who feel better about aging and who feel younger than their actual age are more likely to rate the quality of the sexual aspects of their lives positively and are also more likely to put thought and effort into their sex lives.