An Investigation of the Soldering and Brazing Behaviour of Mg-Mg Joints using Sn, Zn and Mg containing Filler Metals 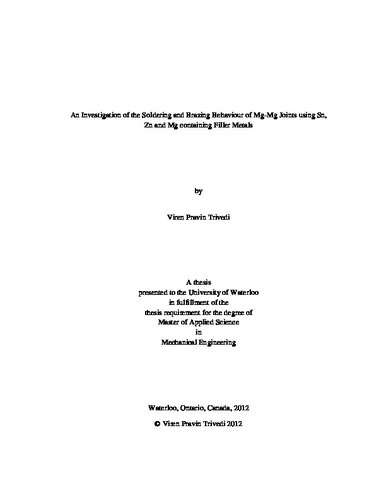 In order to evaluate the feasibility of forming Pure Mg – Pure Mg and Mg Alloy – Mg Alloy joints using soldering and brazing, four filler metals (Sn, Sn-9Zn, Sn-9Zn+X wt%Mg and Mg:Zn:X(Sn-9Zn)) were used at peak heating temperatures of ~250°C, 350°C and 450°C. Differential Scanning Calorimetry (DSC) and microstructure characterization were used to evaluate the successful joints. When using Sn as a filler metal, a joint forms, at temperatures as low as 235°C, which consists of a Mg-Sn eutectic filler layer and a continuous Mg2Sn intermetallic layer at the filler metal/Mg interface. This joint microstructure persists up to peak temperatures of 350°C and 450°C. The main effect of increasing the peak temperature causes an increase in the thickness of the Mg2Sn layer. Joints formed using Sn-9Zn prealloyed filler metal, developed a filler metal composition according to a Sn rich Mg-Sn-Zn ternary microstructure. A continuous Mg2Sn layer still formed in the joint. Ternary phase diagram predictions support the development of a number of MgxZny intermetallic compounds. However, only isolated experimental evidence of Mg-Zn liquid formation was present at peak heating temperature of 350°C and no evidence of MgxZny intermetallic layers was observed for both base metal systems using Sn-9Zn filler metal at 250°C and 350°C. Upon further heating above 350°C, a Mg7Zn3 layer forms which eventually leads to a Mg-Zn eutectic liquid formation as 450°C is reached. Wide gap Transient Liquid Phase Bonding (TLPB) was carried out by adding Mg to Sn-9Zn filler metal. Decrease in liquid volume fraction during solidification was noted with increase in Mg wt% as well as an increase in heating temperatures. Complete consumption of the filler metal was observed at 30wt% Mg and 450°C. Microstructural events were noted to be similar to Mg-Mg couples using Sn-9Zn filler metal. Mg-Zn, 50:50 wt% filler metal was thus used to evaluate joints without Mg2Sn intermetallic formation. Mg-Zn binary liquid phase formation was found to correspond to 342°C upon initial heating and presence of solid Mg7Zn3 in microstructure was found in samples heated to 350°C. Increase in diffusional solidification of Zn into the unreacted Mg powder and Mg base metal was noticed upon further heating to 450°C. Significant influence on the microstructure was noticed with addition of prealloyed Sn-9Zn powder to Mg-Zn filler metal mixture. Sn-9Zn was observed to be consumed in solid state during initial heating while alloying and dissolution of Pure Mg particles was seen to be accelerated. All Pure Mg powder was consumed indicating a large volume fraction present at 450°C in the case of filler containing 10% Sn-9Zn. The primary cellular grains of (Mg) grow from the Mg base metal substrate and Mg7Zn3 solidifies in the intercellular region. In the original filler metal portion of the diffusion couple, a mixture of (Mg), Mg7Zn3 and eutectic appears with a more dispersed character indicative of an equiaxed growth process. Promising results from 45Mg:45Zn:10(Sn-9Zn) wt% and peak heating temperature of 450°C could form basis for future work which can eventually lead to a commercial application.