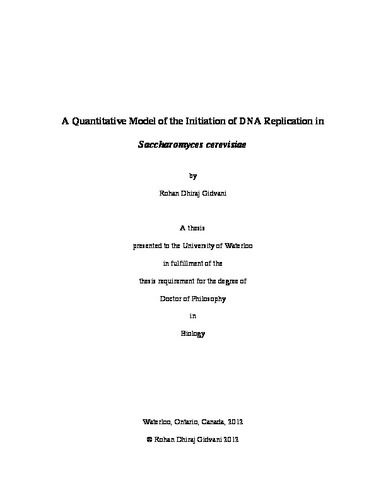 A crucial step in eukaryotic cell proliferation is the initiation of DNA replication, a tightly regulated process mediated by a multitude of protein factors. In Saccharomyces cerevisiae, this occurs as a result of the concerted action of an assembly of proteins acting at origins of replication, known as the pre-replicative complex (pre-RC). While many of the mechanisms pertaining to the functions of these proteins and the associations amongst them have been explored experimentally, mathematical models are needed to effectively explore the network’s dynamic behaviour. An ordinary differential equation (ODE)-based model of the protein-protein interaction network describing DNA replication initiation was constructed. The model was validated against quantified levels of protein factors determined in vivo and from the literature over a range of cell cycle timepoints. The model behaviour conforms to perturbation trials previously reported in the literature and accurately predicts the results of knockdown experiments performed herein. Furthermore, the DNA replication model was successfully incorporated into an established model of the entire yeast cell cycle, thus providing a comprehensive description of these processes. A screen for novel DNA damage response proteins was investigated using a unique proteomics approach that uses chromatin fractionation samples to enrich for factors bound to the DNA. This form of sub-cellular fractionation was combined with differential-in-gel-electrophoresis (DIGE) to detect and quantify low abundance chromatin proteins in the budding yeast proteome. The method was applied to analyze the effect of the DNA damaging agent methyl methanesulfonate (MMS) on levels of chromatin-associated proteins. Up-regulation of several previously characterized DNA damage checkpoint-regulated proteins, such as Rnr4, Rpa1 and Rpa2, was observed. In addition, several novel DNA damage responsive proteins were identified and assessed for genotoxic sensitivity. A strain in which the expression of the Ran-GTPase binding protein Yrb1 was reduced was found to be hypersensitive to genotoxic stress, pointing to a role for this nuclear import-associated protein in DNA damage response. The model presented in this thesis provides a tool for exploring the biochemical network of DNA replication. This is germane to the exploration of new cancer therapeutics considering the link between this disease (and others) and errors in proper cell cycle regulation. The high functional conservation between cell cycle mechanisms in humans and yeast allows predictive analyses of the model to be extrapolated towards understanding aberrant human cell proliferation. Importantly, the model is useful in identifying potential targets for cancer treatment and provides insights into developing highly specific anti-cancer drugs. Finally, the characterization of factors in the proteomic screen opens the door to further investigation of the roles of potential DNA damage response proteins.

Rohan Gidvani (2012). A Quantitative Model of the Initiation of DNA Replication in Saccharomyces cerevisiae. UWSpace. http://hdl.handle.net/10012/6695