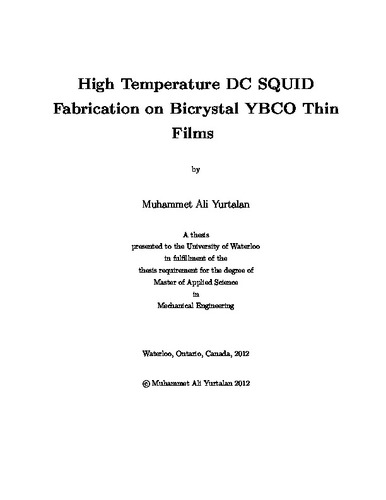 After the discovery of high temperature superconductors, different types of Josephson junctions were investigated and thus a new path is created to obtain high temperature superconducting quantum interface devices(SQUID). However fabrication of high temperature superconductors is a challenging concept. It is desired that the fabrication methods yield to high reproducibility and sensitive devices. Currently, SQUIDs are mostly realized by using bicrystal thin films and by making ramp edge junctions. In this study, nano scale fabrication of YBa₂Cu₃O₇ (YBCO) thin films on bicrystal SrTiO₃ (STO) substrates and implementing DC SQUIDs on these films are investigated. YBCO thin films are deposited on STO substrates with RF magnetron sputtering using argon and oxygen gases. In order to obtain good quality films, deposited films are subjected to post annealing and followed by an oxidation process. After obtaining films, several characterization processes carried. Scanning electron microscopy (SEM) is used to analyze the surface and energy dispersive x-ray diffraction (EDX) is used to analyze the composition of the resulted thin films. Atomic force microscopy is also used to analyze the surface. Magnetic properties of the resulting films are then measured with SQUIDS integrated to magnetic property measurement systems (MPMS). AC susceptibility and voltage-current characterizations are done. Then the contact layer is deposited using DC sputtering system. A hard mask is then deposited to act as a mask during the etching process. In this case, SiO₂ is deposited using RF magnetron sputtering on Au thin layer. An e-beam resist coating is then followed. The resist is patterned by electron beam lithography to achieve 200nm resolution. The developed resist is then removed after the pattern transfer to SiO₂ by reactive ion etching (RIE). After the pattern is transferred via sputter etching of both YBCO and Au the final device is realized having Au on top of YBCO. The results for this experimental procedures are then summarized.