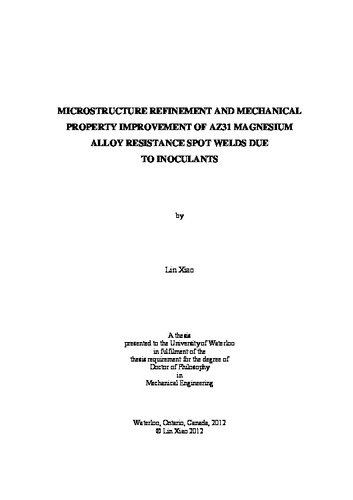 Microstructure refinement was observed in the fusion zone of AZ31 magnesium (Mg) alloy resistance spot welds when an inoculant was added, either Ti, Al8Mn5, or Mn. The dependence of inoculant potency on the lattice disregistry between inoculants and matrix, and on the liquid cooling rate was studied. Microstructural characterization was performed via optical microscopy, scanning electron microscopy (SEM), and transmission electron microscopy (TEM). Thin foils containing the interface of the inoculant particles and Mg matrix were prepared using a focused ion beam (FIB) technique. Columnar dendritic structures in the vicinity of the fusion boundary and equiaxed dendritic structures in the central area were observed in the fusion zone of welds in the SA and SB AZ31Mg alloys from different suppliers. However, the columnar dendritic zone (CDZ) was well restricted, and the width of the CDZ and the diameters of equiaxed dendrites were much smaller in the SA alloy than those in the SB alloy due to the earlier columnar-equiaxed-transition (CET) in the SA alloy. The refined microstructure in the fusion zone of the SA alloy welds is attributed to the pre-existence of the larger Al8Mn5 particles of 4-10 microns in length in the SA alloy which act as an inoculant for alpha-Mg heterogeneous nucleation. Fatigue life and dislocation substructure were compared between the SA and SB welds. The SA welds with the refined microstructure displayed an enhanced fatigue resistance compared to the SB welds, when the interfacial failure took place across the fusion zone. The increased number and dispersion of slip systems in the fine-grained SA welds contributed to the improvement of fatigue life. The well-developed columnar dendritic grains were successfully restricted and the coarse equiaxed dendritic grains were efficiently refined by intentionally adding Ti or Mn inoculant particles into the as-received SB alloy welds. The Ti and Mn particles of about 8μm diameter were observed to promote the nucleation of alpha-Mg grains during welding. TEM examinations showed the existence of local orientation relationships between the respective inoculants Ti, Mn, and Al8Mn5 with the Mg matrix. The further lattice matching was observed between the Al8Mn5 particles and Mg. The diameter of the added inoculant should be larger than 1.8 microns to make it a potent inoculant based on the thermodynamic calculation. Microstructural examinations of samples with different inoculant additions and under different cooling rates showed that the inoculant potency was high for the Ti inoculant, medium for the Al8Mn5, but low for the Mn, when the cooling rate was low. This order in the decrease of grain refinement efficiency is inversely proportional with the order of crystallographic lattice disregistry between inoculants and matrix, which is calculated based on a crystallographic matching model. This implies that the lattice disregistry determines the potency of inoculants at the low cooling rates. In comparison, the lattice disregistry did not influence the heterogeneous nucleation, when the cooling rate was high. It could be inferred that an extremely high cooling rate produces a large supercooling, and provides a sufficient driving force for heterogeneous nucleation.