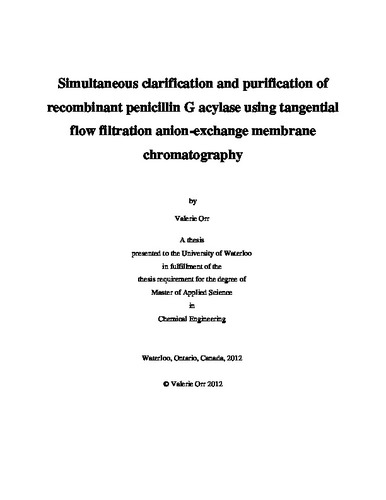 Downstream purification often represents the most cost-intensive step in the manufacturing of recombinant proteins. Conventional purification processes are lengthy, technically complicated, product specific and time-consuming. To address this issue, herein we develop a one step purification system that due to the nature of the non-selective secretion system and the versatility of ion-exchange membrane chromatography can be widely applied to the production of many recombinant proteins. This was achieved through the integration of the intrinsically coupled upstream, midstream and downstream processes, a connection that is rarely exploited. A bioprocess for effective production and purification of penicillin G acylase (PAC) was developed. PAC was overexpressed in a genetically engineered Escherichia coli strain, secreted into the cultivation medium, harvested, and purified in a single step by anion-exchange chromatography. The cultivation medium developed had a sufficiently low conductivity to allow direct application of the extracellular fraction to the anion-exchange chromatography medium while providing all of the required nutrients for sustaining cell growth and PAC overexpression. It was contrived with the purposes of (i) providing sufficient osmolarity and buffering capacity, (ii) minimizing ionic species to facilitate the binding of extracellular proteins to anion-exchange medium, and (iii) enhancing PAC expression level and secretion efficiency. Employing this medium recipe the specific PAC activity reached a high level of 487 U/L/OD600, with more than 90% was localized in the extracellular medium. Both, the osmotic pressure and induction conditions were found to be critical for optimal culture performance. Furthermore, formation of inclusion bodies associated with PAC overexpression tended to arrest cell growth, leading to potential cell lysis. iv At harvest, the whole non-clarified culture broth was applied directly to a tangential flow filtration anion-exchange membrane chromatography system. One-step purification of recombinant PAC was achieved based on the dual nature of membrane chromatography (i.e. microfiltration-sized pores and anion-exchange chemistry). Due to their size, cells remained in the retentate while the extracellular medium penetrated the membrane. Most contaminate proteins were captured by the anion-exchange membrane, whereas the purified PAC was collected in the filtrate. The batch time for both cultivation and purification was less than 24 h and recombinant PAC with high purity (19 U/mg), process yield (74%), and productivity (41 mg/L) was obtained.