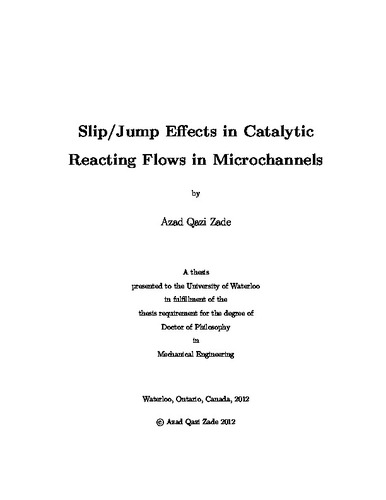 In order to meet the increased power demand for micro-devices in almost every field of engineering, scaling down of conventional power supplies to micro-heat engines, micro fuel cells, micro-turbines and combustors has been proposed as an efficient, safe and reliable energy delivery method for Micro-Electro-Mechanical-Systems. Since homogeneous combustion cannot be sustained at a significant level in microchannels, catalytic walls are usually employed to enhance reactions. One of the complications in miniaturizing conventional power generators, however, is that the common continuum assumption can break down as the characteristic length scale of these devices approaches the molecular mean free path. In this thesis, a general set of boundary conditions for reacting multicomponent gaseous flows is introduced to account for rarefaction effects in micro-reactors. These boundary conditions are derived from the kinetic theory of gases and are utilized to study non-equilibrium transport in reacting flows. A finite-volume code with detailed gas phase and surface reactions is developed to accommodate these boundary conditions. Next, the relative importance of the homogeneous reactions in microchannels is assessed by exploring the interaction between the gas phase and surface reactions under different operating conditions. Finally, the effects of velocity-slip, temperature-jump and concentration-jump on two different sets of catalytic reactive flows are explored; hydrogen oxidation on platinum and ammonia decomposition on ruthenium. In order to identify the limiting values beyond which the gas phase reactions become negligible compared to surface reactions, the contribution of homogeneous reactions to hydrogen conversion in lean hydrogen/air mixtures has been investigated under three key operating parameters: different inlet mass fluxes, fuel-air equivalence ratios and channel heights. Generally, as the channel height decreases, the relative importance of the homogeneous reactions compared to surface reactions becomes negligible. This effect become more pronounced in leaner mixtures. Numerical results also show that in catalytic reactive flows in microchannels, the thermal diffusion effects cannot be neglected especially in the entrance region where temperature gradients are strong. The velocity-slip, temperature-jump and concentration-jump boundary conditions have miscellaneous effects on flow, temperature and species concentration fields. It is shown that the velocity-slip boundary condition only slightly influences the species distribution at the edge of the Knudsen layer as well as inside the channel, while the temperature-jump boundary condition affects the heat and mass transfer characteristics the most. The concentration-jump effect, on the other hand, can counter balance the temperature-jump effects in some cases. Numerical results reveal that the presence of a temperature discontinuity at the wall is the main factor in defining the concentration jump at the edge of the Knudsen layer.