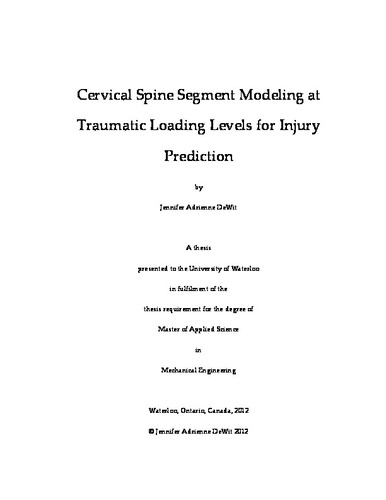 Cervical spine injury can range from minor to severe or fatal, where severe injuries can result in incomplete or complete quadriplegia. There are close to 45,000 Canadians currently affected by paralysis due to traumatic spinal cord injury (tSCI) with an estimated 1700 new cases each year. The majority of tSCI occur in automotive collisions, and current methods for injury prediction are limited to predicting the likelihood for occupant injury but lack the detail to predict the specific injury and location at the tissue level. This research focused on major injuries associated with high impact automotive collisions such as rollover type collisions. Although whiplash is an injury commonly associated with automotive collisions, it was not considered for this study based on the low risk of neurological impairment. The goal of this study was to develop a cervical spine segment finite element model capable of predicting severe injuries such as ligament tears, disc failure, and bone fracture. The segment models used in this study were developed from previous cervical spine segment models representative of a 50th percentile male. The segment models included the vertebrae, detailed representations of the disc annulus fibres and nucleus, and the associated ligaments. The original model was previously verified and validated under quasi-static loading conditions for physiological ranges of motion. To accomplish the objectives of this research, the original models were modified to include updated material properties with the ability to represent tissue damage corresponding to injuries. Additional verification of the model was required to verify that the new material properties provided a physically correct response. Progressive failure was introduced in the ligament elements to produce a more biofidelic failure response and a tied contact between the vertebral bony endplates and the disc was used to represent disc avulsion. To represent the onset of bone fracture, a critical plastic strain failure criterion was implemented, and elements exceeding this criterion were eroded. The changes made to the material models were based on experimental studies and were not calibrated to produce a specific result. After verifying the modifications were implemented successfully, the models were validated against experimental segment failure tests. Modes of loading investigated included tension, compression, flexion, extension and axial rotation. In each case, the simulated response of the segment was evaluated against the average failure load, displacement at failure, and the observed injuries reported in the experimental studies. Additionally, qualitative analysis of elevated stress locations in the model were compared to reported fracture sites. Overall, the simulations showed good agreement with the experimental failure values, and produced tissue failure that was representative of the observed tissue damage in the experimental tests. The results of this research have provided a solid basis for cervical spine segment level injury prediction. Some limitations include the current implementation of bone fracture under compressive loads, and failure within the annulus fibrosus fibres of the disc should be investigated for future models. In addition to material model modifications, further investigation into the kinetics and kinematics of the upper cervical spine segment are important to better understand the complex interactions between the bone geometry and ligaments. This would give insight into the initial positioning and expected response in subsequent models. Future research will include integrating the current segment-level failure criteria into a full cervical spine model for the purpose of predicting severe cervical spine injury in simulated crash scenarios, with future applications in sports injury prevention and protective equipment.