Land Tenure, Ecotourism, and Sustainable Livelihoods: 'Living on the Edge' of the Greater Maasai Mara, Kenya 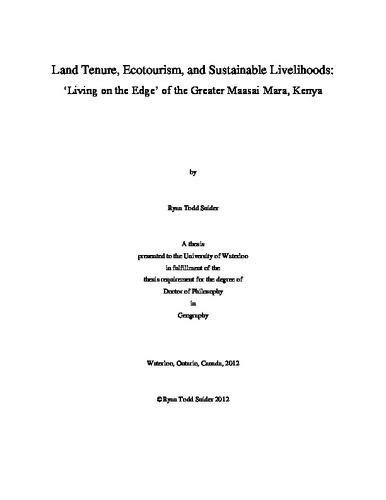 Since its introduction into mainstream society two decades ago, ecotourism has become an international phenomenon. Claimed by its proponents to endorse ecologically, socially, and economically sustainable travel to natural areas, ecotourism is in many ways the conceptual fusion of conservation and development. Yet, despite the optimism often associated with the phenomenon, the question of the degree to which it actually contributes to development, however defined, has become a controversial issue. Theorists and practitioners hold a variety of opinions of ecotourism, ranging from cautious optimism (Honey 2008; Ross & Wall 1999) to outright rejection (Carrier & Macleod 2005; Wheeller 2003). Unfortunately, research shows that the poorest of the poor generally bear the burden of ecotourism initiatives without receiving an equitable share of the associated benefits (Stem et al. 2003; Western & Wright 1994). In response, a sustainable livelihoods approach is proposed as a practical means of understanding the complex livelihood strategies employed by indigenous populations. While tourism research has often focused on the economic impacts of ecotourism initiatives, current livelihoods discourse suggests that the poor draw on a wide range of assets and incorporate a variety of livelihood strategies, in their pursuit of economic gain (Ashley 2002; Ashley et al. 2001; Bebbington 1999; Bennett et al. 1999; Zoomers 1999). This discourse is especially timely for pastoral populations living adjacent to protected areas in Kenya. Recent changes in government policy have promoted the subdivision of land for private ownership (Homewood et al. 2009; Leserogol 2005; Lamprey & Reid 2004), an unexpected transformation that has led to the adoption of ecotourism as a sustainable livelihood strategy. Informed by development theory, tourism theory, and property rights theory, the purpose of this research was to examine the effect of different land tenure regimes on the distribution of benefits accrued from various ecotourism initiatives, and how those benefits impact the livelihoods of the pastoral Maasai living on the periphery of the Maasai Mara National Reserve. Culturally-appropriate, participatory research methods were combined with the Sustainable Livelihoods Framework to document an indigenous perspective on livelihood sustainability. By adapting the conceptual framework to include cultural and historical capital, it served as a lens for viewing and identifying the culturally embedded meaning associated with the recent privatisation of Maasai property. These changes include: significant increases in income generated from ecotourism initiatives, an increased desire to cultivate land, an enhanced capacity for participating in the decision-making process, and greater diversification in local livelihood strategies. However, the empirical evidence also demonstrated that changing property regimes have led to the increased sedentarisation of these semi-nomadic people, resulting in modifications to their pastoral culture, reductions in their herd sizes, and the occasional obstruction of wildlife migratory patterns through the construction of permanent fences.