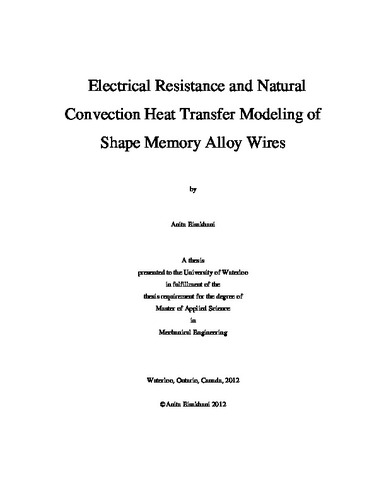 Shape memory alloy (SMA) wires are becoming increasingly popular as actuators in automotive applications due to properties such as large recovery strain, low weight, and silent actuation. The length change and thus actuation in SMA wires occur when the wire is heated, usually by passing a direct current through them. One of the difficulties in controlling electrically-heated SMAs occurs in monitoring their temperature, which is done to control the transformation and hence, actuation and avoid possibly permanent damage due to overheating. The temperature of a SMA wire is usually calculated theoretically based on the wire’s natural convection heat transfer coefficient(h).First-order convective heating models are typically used to calculate the natural convection heat transfer coefficient for SMA wires, but there is often significant uncertainty in these calculations due to a lack of existing correlations for thin cylinders, where curvature effects are significant. The purpose of this investigation is to develop models for SMA wires that may be used to predict the temperature of a current-carrying SMA wire without using direct temperature measurement methods. The models were developed based on experimental results for 0.5 mm diameter NiTi SMA wire. First the effect of various parameters such as wire inclination angle, wire length, ambient pressure, phase transformation time rate and applied external stress were investigated on the SMA wire’s electrical resistance. The electrical resistance of the SMA wire was monitored during one complete heating and cooling cycle. Later, based on the experimental results, a resistance model was developed for the current-carrying SMA wires that can be used to predict the wires’ temperature based on electrical resistance. Second, a natural convection heat transfer correlation was developed for NiTi SMA wire, in the range 2.6E-8≤ RaD ≤ 6E-1, which is appropriate for modeling natural convection in most practical applications at ambient conditions. A pressure variation method was used to obtain a range of Rayleigh number for a heated SMA wire. The ambient pressure was controlled within a vacuum chamber, from 1 atm to 2E-4 atm (0.1 MPa to 2E-5 MPa). Data were collected for the wire at various angles under both 100 MPa and stress-free conditions between horizontal to vertical at each set pressure. The new correlation can be used to determine the convective heat transfer coefficient of an SMA wire of known diameter and inclination angle. The convection coefficient (h) is determined using the correlation along with the Prandtl number (Pr), air dynamic viscosity (μ), air compressibility factor (Z), air thermal conductivity (k), and gas constant (Rc). The wire temperature can then be determined by substituting this coefficient into the convective heat transfer equation.