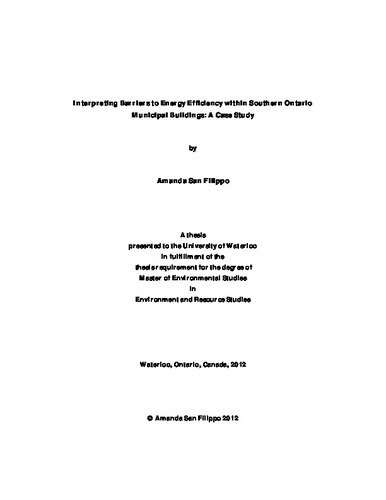 Recent concerns regarding climate change, environmental degradation, human health and energy security associated with the consumption of energy have raised questions about the sustainability of current energy systems. Increasing energy efficiency is considered a core strategy for ultimately achieving a sustainable energy system by offering a cost-effective method for reducing energy use for organisations. However, the slow execution of energy efficiency solutions is said to be reflective of a much wider debate within energy economics, and lead to what is commonly referred to as the “efficiency gap”. Historically, the debate involves theoretical differences between engineering-economic, or “bottom-up”, models which suggest there is ample room for profitable energy efficiency measures; and, orthodox economic, or “top-down”, models which argue that there are significant costs associated with reducing energy consumption. The result has been a diversity of opinions on the potential for, and costs of, energy efficiency, the nature and significance of associated barriers and the appropriateness of various policies in overcoming these barriers. In reality, there is no one-size-fits-all solution to resolving the debate. Rather, the differences across energy service markets require that the existence of an efficiency gap be assessed within the context of these parameters. This requires understanding the nature and significance of barriers to energy efficiency and their economic and organisational impacts within various contexts. This paper explores a taxonomy of barriers to energy efficiency within one potentially influential sub-sector within the country’s most densely populated and highest energy consuming region – Southern Ontario municipalities. The information was collected in three phases. First, a review of the literature was conducted which helped identify and understand potential barriers to energy efficiency and the instances in which they would merit policy intervention. Secondly, 26 questionnaires from individuals responsible for various aspects of energy management and municipal decision-making were completed to gain further insight into municipal structures, policies, decision-making procedures and perception of barriers. These questionnaires were supplemented with 6 detailed interviews conducted with municipal energy managers, or the equivalent. The results presented in this study confirm the presence of an energy efficiency gap within the participating municipalities and that barriers to cost-effective energy efficiency measures do in fact exist. These barriers are most often associated with a lack of information on obtaining appropriate measures and difficulties accessing available capital required for initial investments. The findings support the claims of “bottom-up” models which indicate that policy intervention may rationally overcome many of these barriers. For example, organisational policy measures such as the implementation of energy reserve funds for individual departments may be implemented at low costs. Other barriers that do not justify policy intervention, such as risk, were considered to be less relevant to the participating municipalities. The case studies suggest that with adequate public and organisational policy intervention, the energy efficiency gap may be reduced within these municipalities, thus increasing overall energy efficiency.