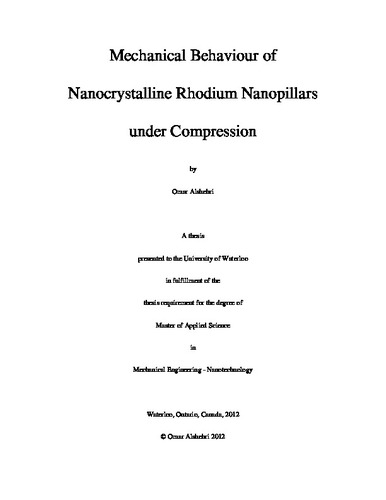 Nanomechanics emerged as chemists and physicists began fabricating nanoscale objects. However, there are some materials that have neither been fabricated nor mechanical investigated at the nanoscale, such as rhodium. Rhodium is used in many applications, especially in coatings and catalysis. To contribute to the understanding the nano-properties of this important material, rhodium was fabricated and mechanically investigated at the nanoscale. The nanopillars approach was employed to study size effects on mechanical properties. Nanopillars with different diameters were fabricated using electroplating followed by uniaxial compression tests. SEM was used as a quality control technique by imaging the pillars before and after compression to assure the absence of buckling, barrelling, or any other problems. Transmission electron microscopy (TEM) and SEM were used as microstructural characterization techniques, and the energy-dispersive X-ray spectroscopy (EDX) was used as the chemical characterization technique. Due to substrate induced effects, only the plastic region of the stress-strain curves were investigated, and it was revealed that rhodium softens with decreased nanopillar diameter. This softening/weakening effect was due to the nanocrystallinity of the fabricated pillars. This effect is consistent with the literature that demonstrates the reversed size effect of nanocrystalline metals, i.e., smaller is weaker. Further studies should focus on eliminating the substrate effect that was due to the adhesion layers between Rh and the silicon substrate being softer than Rh, consequently, causing Rh to sink into the adhesion layer when compressed and thus perturbing the stress-strain curve. Moreover, further investigation of other properties of Rh is required to achieve a comprehensive understanding of Rh at the nanoscale, and to render it suitable for specific, multivariable applications.