Significance of Methylthioadenosine Metabolism to Plant Growth and Development 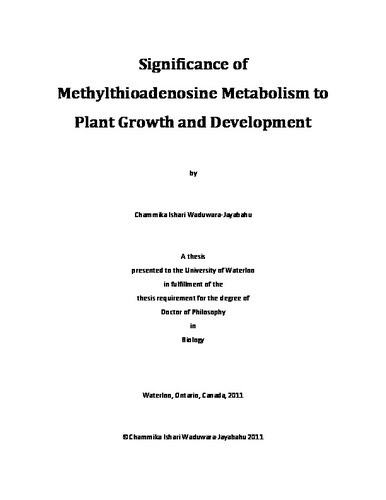 Arabidopsis thaliana contains two genes annotated as methylthioadenosine nucleosidases (MTN): MTN1, At4g38800 and MTN2, At4g34840. This enzyme activity hydrolyzes the methylthioadenosine (MTA) produced by nicotianamine (NA), polyamine (PA), and ethylene biosynthesis to methylthioribose (MTR) within the Yang cycle. Comprehensive analysis of the mtn1-1mtn2-1 mutant line with 14 % residual MTN activity revealed a complex phenotype that includes male and female infertility and abnormal vascular development. Based on metabolite profiling, mtn1-1mtn2-1 has a reduced NA content, altered PA profiles with higher putrescine (Put) and lower spermidine (Spd) and spermine (Spm) levels, disrupted metal ion profiles, and abnormal auxin distribution. The modeling of Arabidopsis PA synthases developed by comparison with the crystal structures of human Spd and spermine synthases complexed with MTA suggests that Arabidopsis PA synthases are product inhibited by MTA. Thus, these pleiotropic mutant phenotypes possibly are the result of one metabolite directly inhibiting numerous pathways. By creating and analyzing a series of mutants and transgenic lines with moderate levels of MTN activity the complex phenotype of mtn1-1mtn2-1 was dissected in order to determine the fundamental trait associated with MTN deficiency. Two double mutants were identified by crossing single T-DNA mutants, and an artificial micro RNA (amiRNA) line was generated by transforming mtn1-1 with amiRNA specific to MTN2. The T-DNA double mutants, mtn1 4mtn2-1, and mtn1-1mtn2-5 had 98 % and 28 % MTN activity, respectively, whereas the amiRNA line has 16 % MTN activity. The growth, development, and metabolite analysis of these mutants revealed that their delayed bolting, correlated with an increased number of leaves, was the common trait observed across all lines. Xylem proliferation defects and increased number of vascular bundles per unit area were shared in all lines except mtn1 4mtn2-1. Based on these results, auxin distribution is proposed as the key target of the accumulated MTA that results from MTN deficiency. The infertility related to MTN-deficiency was restored by supplying 100 µM of Spd to the mtn1-1mtn2-1 seedlings over 14 days. The data presented in this thesis reveals two potential links that work synergistically to recover fertility in this mtn1-1mtn2-1 line. Based on a detailed analysis of the female gynoecia morphology, transcript, hormone and metabolite profiles, it is proposed that the Spd partially reverses the mutant phenotypes through the recovery of auxin distribution and /or vascular development. Interestingly, the Spd effect seems to be transgenerational: they give rise to plants that are genotypically mtn1-1mtn2-1 but phenotypically WT over generations. Taken together, all of the results suggest that MTN-deficient mutants provide the potential for unraveling the molecular mechanism associated with nicotianamine, polyamines, auxin, and vascular development with respect to enhancing the efficiency of nutrient use and yields in plants.