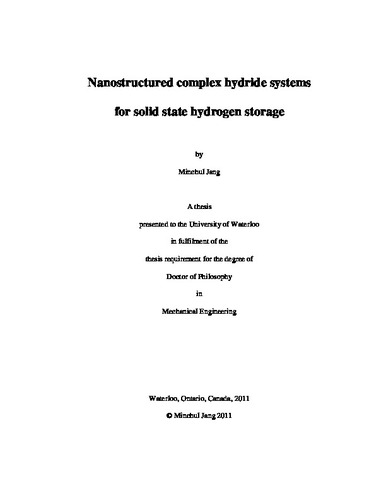 The present work reports a study of the effects of the formation of a nanostructure induced by high-energy ball milling, compositions, and various catalytic additives on the hydrogen storage properties of LiNH2-LiH and LiNH2-MgH2 systems. The mixtures are systematically investigated using X-ray diffraction (XRD), Fourier transform infrared spectroscopy (FT-IR), scanning electron microscopy (SEM), differential scanning calorimetry (DSC), thermogravimetric analysis (TGA), and a Sieverts-type apparatus. The results indicate that microstructural refinement (particle and grain size) induced by ball milling affects the hydrogen storage properties of LiNH2-LiH and LiNH2-MgH2 systems. Moreover, the molar ratios of the starting constituents can also affect the dehydrogenation/hydrogenation properties. In the LiNH2-LiH system, high-energy ball milling is applied to the mixtures of LiNH2 and LiH with molar ratios of 1:1, 1:1.2 and 1:1.4 LiH. The lowest apparent activation energy is observed for the mixture of LiNH2-LiH (1:1.2) milled for 25 h. The major impediment in the LiNH2-LiH system is the hydrolysis and oxidation of LiH, which causes a fraction of LiH to be inactive in the intermediate reaction of NH3+LiH→LiNH2+H2. Therefore, the LiNH2-LiH system always releases NH3, as long as a part of LiH becomes inactive, due to hydrolysis/oxidation, and does not take part in the intermediate reaction. To prevent LiH from undergoing hydrolysis/oxidation during desorption/absorption, 5 wt. % graphite is incorporated in the (LiNH2+1.2LiH) system. The DSC curve of the mixture does not show a melting peak of retained LiNH2, indicating that graphite can prevent or at least substantially reduce the oxidation/hydrolysis of LiH. Moreover, compared to the mixture without graphite, the mixture with graphite shows more hydrogen capacity, thus this mixture desorbs ~5 wt.% H2, which is close to the theoretical capacity. This system is fully reversible in the following reaction: LiNH2+LiH→Li2NH+H2. However, the equilibrium temperature at the atmospheric pressure of hydrogen (0.1 MPa H2) is 256.8°C for (LiNH2+1.2LiH) mixture, which is too high for use in onboard applications. To overcome the thermodynamic barrier associated with the LiNH2/LiH system, LiH is substituted by MgH2; therefore, the (LiNH2+nMgH2) (n=0.55, 0.6 and 0.7) system is investigated first. These mixtures are partially converted to Mg(NH2)2 and LiH by the metathesis reaction upon ball milling. In this system, hydrogen is desorbed in a two-step reaction: [0.5xMg(NH2)2+xLiH]+[(1-x)LiNH2+(0.5-0.5x)MgH2]→0.5Li2Mg(NH)2+1.0H2 and 0.5Li2Mg(NH)2+MgH2→0.5Mg3N2+LiH+H2. Moreover, this system is fully reversible in the following reaction: Li2Mg(NH)2+2H2→ Mg(NH2)2+2LiH. Step-wise desorption tests show that the enthalpy and entropy change of the first reaction is -46.7 kJ/molH2 and 136.1 J/(molK), respectively. The equilibrium temperature at 0.1 bar H2 is 70.1°C, which indicates that this system has excellent potential for onboard applications. The lowest apparent activation energy of 71.7 kJ/mol is observed for the molar ratio of 1:0.7MgH2 milled for 25 h. This energy further decreases to 65.0 kJ/mol when 5 wt.% of n-Ni is incorporated in the system. Furthermore, the molar ratio of MgH2/LiNH2 is increased to 1.0 and 1.5 to increase the limited hydrogen storage capacity of the (LiNH2+0.7MgH2) mixture. It has been reported that the composition changes can enhance the hydrogen storage capacity by changing the dehydrogenation/hydrogenation reaction pathways. However, theoretically predicted LiMgN is not observed, even after dehydrogenation at 400°C. Instead of this phase, Li2Mg(NH)2 and Mg3N2 are obtained by dehydrogenation at low and high temperatures, respectively, regardless of the milling mode and the molar ratio of MgH2/LiNH2. The only finding is that the molar ratio of MgH2/LiNH2 can significantly affect mechano-chemical reactions during ball milling, which results in different reaction pathways of hydrogen desorption in subsequent heating processes; however, the reaction’s product is the same regardless of the milling mode, the milling duration and their composition. Therefore, the (LiNH2+0.7MgH2) mixture has the greatest potential for onboard applications among Li-Mg-N-H systems due to its high reversible capacity and good kinetic properties.