A Multidimensional Model of Biological Sex 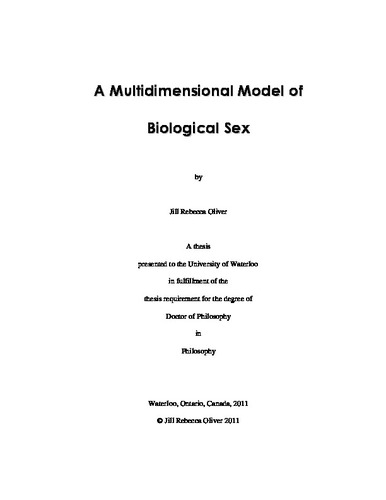 This dissertation is about biological sex and how we ought to make sense of it. By biological sex I mean those elements of an individual’s body that are involved in reproduction of the individual’s species; by make sense of it I mean the way in which the occurrence of these elements and their interactions are conceptualized in our minds. Given certain things that are known about sex and reproduction, I argue in this dissertation that sex, maleness, and femaleness ought to be conceptualized in a specific way: this specific way is what I call the multidimensional model of sex. My argument challenges what I call the folk understanding of biological sex, which is (generally speaking) the understanding that most people in most places have about what makes a person male or female. This understanding, I argue, takes the concepts MALE and FEMALE to be logically opposed and atomistic, and constitutive of categories with homogeneous members. I explore three important facts that challenge this understanding: 1) the emphasis on continuity within biological thought, 2) the understanding of sex differences within biology, and 3) the occurrence of intersexuality in human beings. Some authors have already proposed continuum-based understandings of SEX as a replacement for the folk understanding. I identify and discuss three of these: 1) the basic continuum model (Fausto-Sterling 1993, 2000; Blackless, et al. 2000; Kessler 1998; Preves 2003; Intersex Society of North America 2011a; Organisation International des Intersexués 2011a), 2) the multiple continua model (Stoltenberg 1989), and 3) the hybrid model (Stein 2001; Dreger 1998). Inherent to different degrees within each of these models is the belief that maleness and femaleness are somehow conceptually opposite (which is a belief also shared by the folk understanding). This belief, I argue, is not borne out in nature, as demonstrated in part by the occurrence of intersexuality in the species Homo sapiens, and the occurrence of hermaphroditism in other species. These occurrences, I argue, suggest another way to make sense of sex. The model of sex that I present is inspired by the occurrence of intersexuality and hermaphroditism, and also by Sandra Bem’s (1974) work on the concept ANDROGYNY. Bem reconceptualized masculinity and femininity as dimensions of psychological androgyny. I argue that the concepts MALE and FEMALE, and thus BIOLOGICAL SEX, can be understood in a similar way. I propose a multidimensional model of SEX that includes the concepts MALE and FEMALE as intersecting continua that create a space in which the separate features of an individual’s sex are each individually located. The dissertation concludes by discussing the moral implications of the multidimensional model, as some of our judgments about the rightness or wrongness of a person’s actions are related to our understanding of that person’s sex. But if the words male and female come to refer to individual parts of the body and not whole people (as I argue they would, if the multidimensional model were adopted), how would our ideas about the moral acceptability of certain actions and practices change? By examining this general question, I show that adoption of the multidimensional model of sex is important not just because it offers a more biologically accurate representation of sex: it is also important, I conclude, because there is good reason to think that adopting it could improve the quality of life for many.