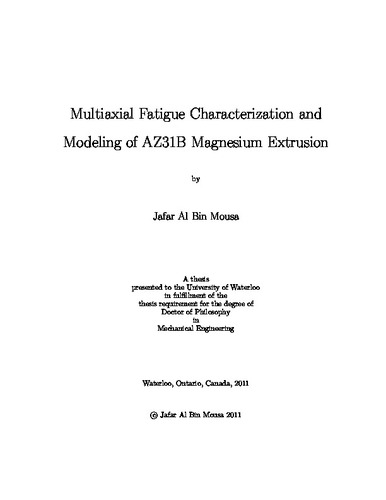 The demand for lightweight materials in automobiles has been motivated by two factors: fuel economy and air pollution reduction. One of the first steps taken in automotive vehicle weight reduction was the use of aluminum alloys for both structural and non-structural parts. Although magnesium alloys, that have one fourth the density of steel and one third that of aluminum, have also been used in automobiles, however, their applications were limited to non-structural parts. Recently, interest has been focused on using magnesium alloys as structural materials for automotive load-bearing components. Load-bearing components in automobiles are usually subjected to multiaxial cyclic loading. Fatigue is considered to be a significant cause of ground vehicle component failure. Therefore, for magnesium alloys to be used for these components, an understanding of their fatigue behaviour is necessary. In this study, series of monotonic and cyclic tests were conducted on smooth specimens machined from AZ31B magnesium extrusion section. Two loading modes were considered in this investigation, axial and torsional. Monotonic tensile and compressive tests were performed at three different orientations, longitudinal (LD), i.e., parallel to the extrusion direction, 45° and transverse (TD) directions. Monotonic torsion tests were performed on specimens that were machined along the LD. Similarly, cyclic axial and torsional as well as multiaxial axial-torsional tests were performed on specimens that that were machined along the LD. Three different phase angles were considered for multiaxial tests: in-phase, and 45° and 90° out-of-phase. It was found that monotonic axial stress-strain behaviour is direction dependent due to the different deformation mechanisms involved. Significant yield anisotropy and sigmoidal-type hardening were observed. Twinning-detwinning deformation was considered as the major cause of these behaviours. On the other hand, monotonic torsional stress-strain curve had a linear hardening behaviour. Cyclic axial behaviour was found to be affected by twinning-detwinning deformation. Its most significant characteristics are: yield asymmetry, power-like hardening in compressive reversal and sigmoidal-type hardening in tensile reversal. This unusual behaviour was attributed to the contribution of three different deformation mechanisms: slip, twinning and detwinning. Due to yield asymmetry, significant positive mean stress was observed especially at LCF. Cyclic hardening was also observed and it was found to be associated with a substantial decrease in plastic strain energy density. Cyclic shear behaviour was symmetric and did not exhibit any of the aforementioned behaviours in cyclic axial loading. Two major observations were made from multiaxial tests. First, additional hardening due to nonproportionality was observed. Second, phase angle has no effect on fatigue life. Three fatigue life models were considered for multiaxial fatigue life prediction: Smith-Watson-Topper, Fatemi-Socie and Jahed-Varvani. The first two models are based on strain and are evaluated on specific critical planes. The third model is based on energy densities calculated from hysteresis loops. Strain- and energy-life curves had knees and pronounced plateaus. Therefore, it was not possible to model the entire fatigue life using Coffin-Manson-Type equations. Low cycle fatigue lives were predicted within ۬x scatter bounds using the Fatemi-Socie and the Jahed-Varvani models for all loading conditions which was not the case with Smith-Watson-Topper model. Total energy, the sum of plastic and positive elastic strain energy densities, was found to correlate fatigue lives for several wrought Mg-alloys under different loading conditions.