Succession in the Understory of Red Pine Plantations in Southern Ontario 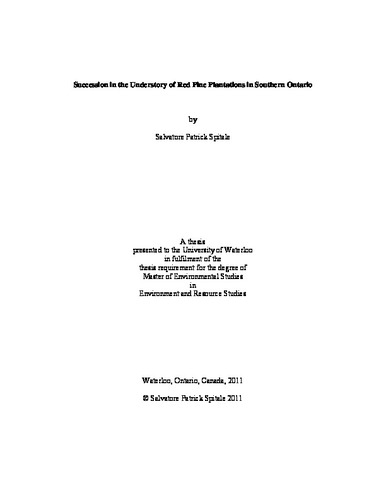 Thousands of hectares of red pine (Pinus resinosa Ait.) plantations were established during the early 20th century to restore abandoned agricultural lands and increase forest cover. Concern over the ecological integrity [i.e. the degree to which a community is determined to be characteristic of its natural region, including abiotic and biotic components, likely to persist and maintain the rates of change and supporting processes (Canada National Parks Act (S.C. 2000, c. 32) 2011) of these plantations and a desire to increase native forest cover has prompted a more thorough understanding of the understory succession of these plantations. This study addresses the question, how does the understory vegetation composition and diversity in managed red pine plantations compare to the understory of a reference deciduous forest?. I examined the understory diversity in a chronosequence of managed red pine plantations owned by Simcoe County. Biophysical characteristics including diffuse non-interceptance (DIFN), tree regeneration, litter depth, and soil physical and chemical properties were gathered from three replicates of each of four age groups and from a reference deciduous forest group in order to determine how each variable changed and influenced the succession of the understory diversity. Field investigations were completed during the spring, summer, and fall of 2009 in order to examine seasonal differences in diversity. A two-way analysis of variance with a Tukey’s post hoc test was used to determine if the forest groups were significantly different from each other for each variable measured. Species diversity (measured by the Shannon-Wiener Index) generally increased with plantation age and seasonal differences were apparent. A lack of significant difference between the oldest plantation group (est. 1927-1932) and the reference forest group indicates diversity is increasing; this is intriguing because, in contrast, species composition is only 30% similar. This may indicate either not enough time has passed for the understory to regenerate or the understory in the plantations is succeeding in a different trajectory. Furthermore, spring ephemeral species were lacking in the understory of the plantation forests indicating this phenological group is not regenerating in the plantations. Tree density is generally increasing in the plantation groups and the dominant tree species regenerating in the oldest plantation group includes a similar suite of species to that found in the reference forest groups. This indicates that the canopy is succeeding towards a native forest community. Pearson correlation analysis revealed that litter depth is significantly negatively correlated to diversity in the summer and fall (p<0.01). Litter depth was also the primary predictor variable produced by the forward stepwise regression in the summer and fall indicating that litter depth is a major driver of diversity. From comparative studies, a deeper litter layer often inhibits the germination and emergence of herbaceous species; from my study, this may explain the lack of spring ephemerals in the plantation groups observed. DIFN was significantly negatively correlated to diversity in the spring (p<0.01) and was the predictor variable for spring diversity indicating that light characteristics in the spring are a major variable influencing spring diversity. With increasing age of plantation group the DIFN followed a similar pattern to the reference forest group indicating that the thinning regime and regeneration is shifting the light characteristics to that found in a natural forest stand. I conclude that the thinning regime in red pine plantation is promoting the regeneration of trees and increasing the diversity of understory vegetation. However, in order to direct the successional trajectory of the understory vegetation of red pine plantations to a composition similar to the native woodlands of that area, a modified management program should be considered and active restoration should be implemented.