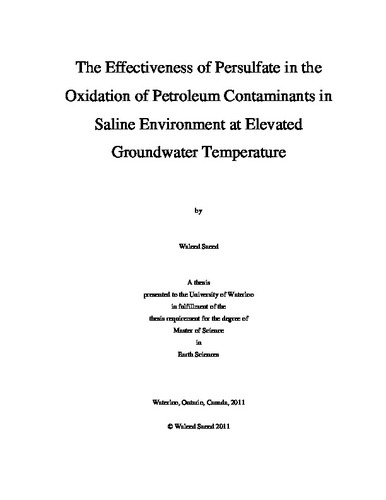 In the past few decades, several aqueous oxidants have been employed (e.g., permanganate, persulfate) to remediate petroleum hydrocarbons. However, the majority of the research in this field has been focused primarily on the use of oxidants in treating fresh water at low groundwater temperature. In this study, bench experiments were carried out to investigate the effectiveness of persulfate (PS) as an oxidant to remediate petroleum hydrocarbons in alternative settings (saline environments at high groundwater temperature). Benzene, Toluene, Ethylbenzene, Xylenes (BTEX), Trimethylbenzenes (TMBs), and Naphthalene were the target organic compounds investigated. Three important aspects were examined during this laboratory study: 1) the evaluation of (alkaline activated and non-activated) persulfate as a chemical oxidation agent; 2) the investigation of the effect of different temperatures (10°C versus 30°C); and 3) the examination of the effect of different persulfate concentration (20 versus 100 g/L) on the reactivity of persulfate. The results showed the high potential of persulfate to remediate the target contaminants under certain conditions. In general, alkaline-activated persulfate showed a higher potential than the non-activated persulfate. However, precipitations of calcium hydroxide were observed due to the reaction between sodium hydroxide and the high concentration of calcium which will limit the use of alkaline-activated persulfate in this particular groundwater setting The results also showed that the initial concentration of persulfate and the system temperature can play important roles in enhancing the effectiveness of PS to oxidize the target contaminants. For instance, the oxidation rate of the target contaminants was seen to be dramatically increased by increasing the persulfate addition from 20 to 100 g/L as well as with increasing the system temperature from 10°C to 30°C. However, increasing both factors (temperature and concentration) accelerated the decomposition rate of PS. Lowering the system pH was tremendously successful in order to enhance the oxidation rate of all compounds. Moreover, the expected effect of the radicals scavenging at acidic pH by Cl- and Br – ,which was reported in the literatures (e.g., Pignatello et al., 2006; Grebel et al., 2010; Suri et al., 2010), was not observed in this study which might be attributed to the contribution of the produced halogen radicals to the contaminant oxidation.

Waleed Saeed (2011). The Effectiveness of Persulfate in the Oxidation of Petroleum Contaminants in Saline Environment at Elevated Groundwater Temperature. UWSpace. http://hdl.handle.net/10012/6396