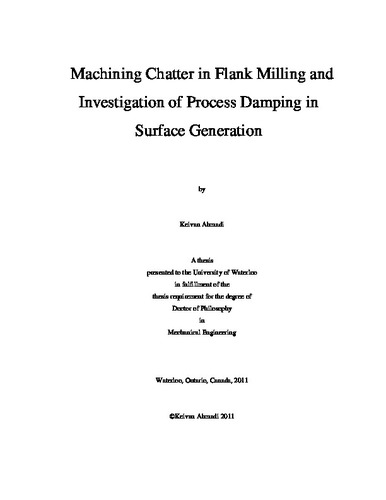 Although a considerable amount of research exists on geometrical aspects of 5-axis flank milling, the dynamics of this efficient milling operation have not yet been given proper attention. In particular, investigating machining chatter in 5-axis flank milling remains as an open problem in the literature. The axial depth of cut in this operation is typically quite large, which makes it prone to machining chatter. In this thesis, chatter in 5-axis flank milling is studied by developing analytical methods of examining vibration stability, generating numerical simulations of the process, and conducting experimental investigations. The typical application of 5-axis milling includes the machining of thermal resistant steel alloys at low cutting speeds, where the process damping dominates the machining vibration. The results of experimental study in this thesis showed that the effect of process damping is even stronger in flank milling due to the long axial engagement. Accordingly, the first part of the thesis is devoted to studying process damping, and in the second part, the modeling of chatter in flank milling is presented. Linear and nonlinear models have been reported in the literature that account for process damping. Although linear models are easier to implement in predicting stability limits, they could lead to misinterpretation of the actual status of the cut. On the other hand, nonlinear damping models are difficult to implement for stability estimation analytically, yet they allow the prediction of “finite amplitude stability” from time domain simulations. This phenomenon of “finite amplitude stability” has been demonstrated in the literature using numerical simulations. In this thesis, that phenomenon is investigated experimentally. The experimental work focuses on uninterrupted cutting, in particular plunge turning, to avoid unduly complications associated with transient vibration. The experiments confirm that, because of the nonlinearity of the process damping, the transition from fully stable to fully unstable cutting occurs gradually over a range of width of cut. The experimental investigation is followed by developing a new formulation for process damping based on the indentation force model. Then, the presented formulation is used to compute the stability lobes in plunge turning, taking into account the effect of nonlinear process damping. The developed lobes could be established for different amplitudes of vibration. This is a departure from the traditional notion that the stability lobes represent a single boundary between fully stable and fully unstable cutting conditions. Moreover, the process damping model is integrated into the Multi-Frequency Solution and the Semi Discretization Method to establish the stability lobes in milling. The basic formulations are presented along with comparisons between the two approaches, using examples from the literature. A non-shallow cut is employed in the comparisons. Assessing the performance of the two methods is conducted using time domain simulations. It is shown that the Semi Discretization Method provides accurate results over the whole tested range of cutting speed, whereas higher harmonics are required to achieve the same accuracy when applying the Multi Frequency Solution at low speeds. Semi Discretization method is modified further to calculate the stability lobes in flank milling with tools with helical teeth. In addition to the tool helix angle and long axial immersion, the effect of instantaneous chip thickness on the cutting force coefficients is considered in the modified formulation of Semi Discretization as well. Considering the effect of chip thickness variation on the cutting force coefficients is even more important in the modeling of 5-axis flank milling, where the feedrate, and consequently the chip thickness, varies at each cutter location. It also varies along the tool axis due to the additional rotary and tilt axis. In addition to the feedrate, the tool and workpiece engagement geometry varies at each cutter location as well. The actual feedrate at each cutter location is calculated by the dynamic processing of the toolpath. The tool and workpiece engagement geometry is calculated analytically using the parametric formulation of grazing surface at the previous and current passes. After calculating the instantaneous chip thickness and tool/workpiece engagement geometry, they are integrated into the Semi Discretization Method in 5-axis flank milling to examine the stability of vibration at each cutter location. While the presented chatter analysis results in establishing stability lobes in 3-axis flank milling, it results in developing a novel approach in presenting the stability of the cut in 5-axis flank milling. The new approach, namely “stability maps”, determines the unstable cutter locations of the toolpath at each spindle speed. The accuracy of established 3-axis flank milling stability lobes and 5-axis stability maps is verified by conducting a set of cutting experiments and numerical simulations.