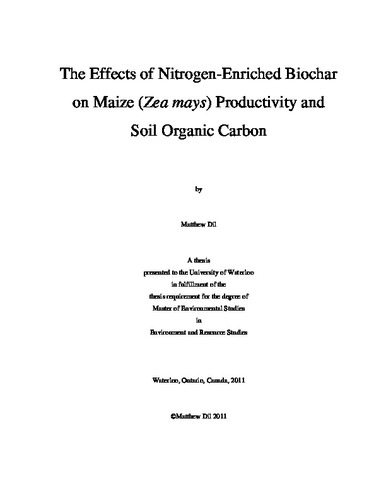 Loss of soil organic carbon (SOC) resulting from intensive agriculture practices has impacts on both climate change, through emissions of greenhouse gases, as well as food security because of declines in soil fertility. A possible solution for rapidly restoring and stabilizing SOC is through additions of biochar to soil. Biochar is a carbon-rich material formed by pyrolysis (heating) of biomass in an oxygen-limited environment. A biofuel company, ABRI-Tech, has proposed an economically feasible method of using biochar in Canadian agriculture that involves enriching biochar with urea ammonium nitrate (UAN) fertilizer and applying small amounts (~1 t/ha) of biochar annually. The main objectives of this study were to evaluate the ability of biochar-UAN (Char+) to increase agricultural productivity and SOC in temperate regions. This study presents the results of a growth chamber experiment, two field trials and Century Soil Organic Matter modeling. In the growth chamber experiment, Char+ significantly increased the shoot dry mass (DM) of maize (Zea mays) by 310% in sandy textured soil, 112% in medium soil and no significant difference was observed in fine soil. However, in all soil textures, as well as the Char+ field trial, the maize DM resulting from 1 t/ha Char+ was not significantly different from UAN treatments. The biochar field trials demonstrated that if 1 t/ha of Char+ was applied annually the maize biomass production would not be affected after 6-12 years (6.2-12.4 t biochar/ha), and there may be slight improvement in yields of about 25% after 25 years (24.8 t biochar/ha). Although no significant differences in SOC were found in the field trial, there was a trend of increasing SOC as biochar application rates increased. The Century model predicted that annual addition of 1 or 2 t Char+/ha will increase SOC more than other management practices, including crop rotation, no-till and manure, over a 150 year period. The model predicted that applying 1 t Char+/ha per year to a sandy soil will increase SOC by 10% after 10 years and 17% after 20 years. This research is significant because it shows how an economically feasible method of using biochar can improve the sustainability of agroecosystems and increase terrestrial carbon sequestration in temperate regions.