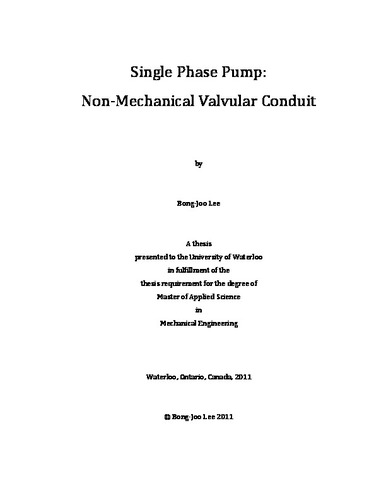 This thesis evaluates performance of a non-mechanical conduit valve that was designed for the purpose of this research. The motivation came from the need for a cooling system of portable computers (e.g. laptops and netbooks). As the technology of micro-processors in portable computers advances, they will generate more heat, requiring a more effective and efficient way to cool the system. Based on this fact, a new method of heat dissipation using a single-phase liquid (i.e. water) instead of air was examined. This potentially allowed 80 times more heat dissipation, which translates to better and faster computers for the near future. In designing a single-phase-liquid micro-scale cooling system, various pump mechanisms and their functionalities were considered. It was concluded that a diaphragm pump design is the most effective candidate for this cooling system. The essential component when designing a diaphragm pump is a valve; however, the main issues in selecting a valve are its mechanics and required maintenance. Thus, the non-mechanical valvular conduit, which uses no moving mechanism, was studied through a combination of numerical/computational and experimental methods. The non-mechanical valvular conduit is a micro-channel with a complex geometry; hence, this conduit uses the principle of pressure resistance in the channel flow such that the flow is uni-directional. Through the numerical study, the valvular conduit design’s geometric dimensions were optimized. Then numerical simulations of the pumping/oscillating sequence of the valvular conduit were conducted to examine the effectiveness of the valve when placed in use for a diaphragm pump. It was found that the non-mechanical valve was 38 % more effective in the favorable direction than the opposite direction. As for the necessary heat dissipation, this conduit design demonstrates a great potential to dissipate the thermal design power (TDP) of Intel Pentium D processor (i.e. 130 [W]). During the experiments, the non-mechanical valve confirmed the numerical results. The experimental results also demonstrated that the favorable direction flow produced 244 % less pressure resistance than the opposite direction flow. It was concluded that the non-mechanical valvular conduit can be an effective application for diaphragm pumps in macro and micro-scale without any possibility of obstructing a mechanism.