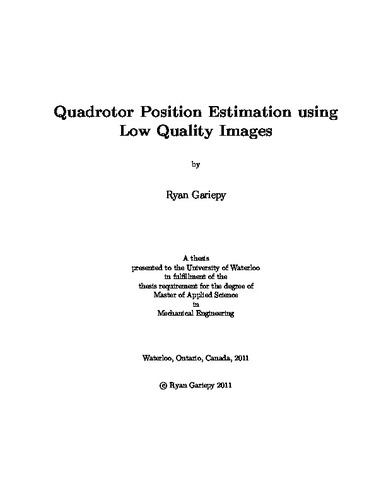 The use of unmanned systems is becoming widespread in commercial and military sectors. The ability of these systems to take on dull, dirty, and dangerous tasks which were formerly done by humans is encouraging their rapid adoption. In particular, a subset of these undesirable tasks are uniquely suited for small unmanned aerial vehicles such as quadrotor helicopters. Examples of such tasks include surveillance, mapping, and search and rescue. Many of these potential tasks require quadrotors to be deployed in environments where a degree of position estimation is required and traditional GPS-based positioning technologies are not applicable. Likewise, since unmanned systems in these environments are often intended to serve the purpose of scouts or first--responders, no maps or reference beacons will be available. Additionally, there is no guarantee of clear features within the environment which an onboard sensor suite (typically made up of a monocular camera and inertial sensors) will be able to track to maintain an estimate of vehicle position. Up to 90% of the features detected in the environment may produce motion estimates which are inconsistent with the true vehicle motion. Thus, new methods are needed to compensate for these environmental deficiencies and measurement inconsistencies. In this work, a RANSAC-based outlier rejection technique is combined with an Extended Kalman Filter (EKF) to generate estimates of vehicle position in a 2--D plane. A low complexity feature selection technique is used in place of more modern techniques in order to further reduce processor load. The overall algorithm was faster than the traditional approach by a factor of 4. Outlier rejection allows the abundance of low quality, poorly tracked image features to be filtered appropriately, while the EKF allows a motion model of the quadrotor to be incorporated into the position estimate. The algorithm is tested in real-time on a quadrotor vehicle in an indoor environment with no clear features and found to be able to successfully estimate position of the vehicle to within 40 cm, superior to those produced when no outlier rejection technique was used. It is also found that the choice of simple feature selection approaches is valid, as complex feature selection approaches which may take over 10 times as long to run still result in outliers being present. When the algorithm is used for vehicle control, periodic synchronization to ground truth data was required due to nearly 1 second of latency present in the closed--loop system. However, the system as a whole is a valid proof of concept for the use of low quality images for quadrotor position control. The overall results from the work suggest that it is possible for unmanned systems to use visual data to estimate state even in operational environments which are poorly suited for visual estimation techniques. The filter algorithm described in this work can be seen as a useful tool for expanding the operational capabilities of small aerial vehicles.