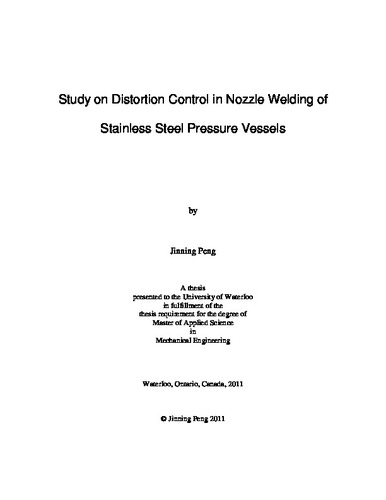 The welding of austenite stainless steel often results in large amount of welding distortion due to its high thermal expansion coefficient and low thermal conductivity. This has created great difficulty in the dimensional control of the welded stainless steel structure, ending up with high manufacturing cost. Researches on the welding distortion of stainless steels were very limited, especially for large weld structures with complex component shapes. The studies of this thesis were initiated with focus on the stainless steel nozzle-to-shell-can weld structures, a very typical structural configuration for pressure vessels used in petrochemical and nuclear power generation industries. Both the experimental and the FEA (finite element analysis), i.e. computational simulation, approaches were taken in the studies which addressed the influences of the welding fixture, the welding sequence, and the welding process on the distortion caused by stainless steel nozzle-to-shell welding. The investigations employed single and multi-nozzle weld test models (called mockups in the thesis) or FEA models. Manual GTAW (gas tungsten arc welding) and SMAW (shielded metal arc welding) processes were selected to represent the most common practice for stainless steel nozzle welding. The FEA simulations were conducted with ABAQUS program using sequentially coupled transient analysis method with lumped weld passes to achieve high computing efficiency. The investigations on the effect of the welding fixture concluded that the contour fixtures introduced in the thesis be effective for reducing the welding distortion for both the single and the multi-nozzle welding. The contour fixtures tend to localize the welding distortion, hence yield less impact on the global distortion of the whole weld structure. The rib-bar fixture, a more common fixture type for multi-nozzle welding, was found resulting in a big jump in the shell plate distortion when the fixture was removed. The studies on the influence of the welding sequence revealed that a progressive approach was more favorable for distortion control under the given nozzle-to-shell weld structure configurations. The best sequence suggested is to start welding at one nozzle, firstly on shell OD (outside diameter) side then on ID (inside diameter) side, then proceed to next neighboring nozzle. The effect of the welding direction of each weld pass was found affecting only the nozzle angular distortion. The experimental data showed that the manual GTAW process developed much higher shell plate distortion than the SMAW process. The reason would be that a higher percentage of the welding heat had been consumed on the base metal. The influence of the weld bead size didn’t appear to be significant. In the FEA study on the effect of the size of the lumped weld pass, the increase in weld bead size even resulted in a decrease in weld distortion. From the FEA simulation point of view, using large lumped pass would be a highly efficient choice without compromising too much in the precision of the distortion prediction. The FEA study confirmed that a decrease in cooling time after welding would result in more welding distortion. The large scale multi-nozzle mockup with rib-bar fixture demonstrated a maximum out-of-plane shell distortion of 16.4mm after the welding of 10 nozzles with GTAW+SMAW process, which suggests that additional measures should be developed to further control the welding distortion.