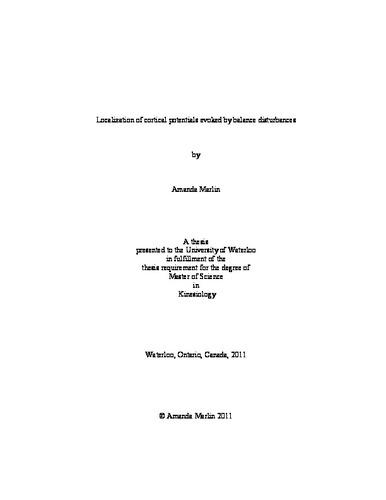 The ability to correct balance disturbances is essential for maintaining upright stability. Recent literature highlights a potentially important role for the cerebral cortex in controlling compensatory balance reactions. The objective of this research was to provide a more detailed understanding of the specific neurophysiologic events occurring at the cortex following balance disturbances. More specifically, the focus was to determine whether the N1, a cortical potential evoked during balance control, and the error-related negativity (ERN), a cortical potential measured in response to errors during cognitive tasks, have similar cortical representation, revealing a similar link to an error detection mechanism. It was hypothesized that the N1 and ERN would have the same generator located in the anterior cingulate cortex (ACC). Fourteen healthy young adults participated in a balance task (evoked N1) and a flanker task (evoked ERN). Temporally unpredictable perturbations to standing balance were achieved using a lean and release cable system. Electromyography and centre of pressure were measured during the balance task. Reaction times and error rates were measured during the flanker task. Electroencephalography was recorded during both tasks. Source localization was performed in CURRY 6 using a single fixed coherent dipole model to determine the neural generator of the N1 and ERN. The results revealed that the locations of the N1 and ERN dipoles were different. The mean (n=9) distance between N1 and ERN dipoles was 25.46 ± 8.88 mm. The mean Talairach coordinates for the ERN dipole were (6.47 ± 3.08, -4.41 ± 13.15, 41.17 ± 11.63) mm, corresponding to the cingulate gyrus (Brodmann area 24). This represents the ACC, supporting results from previous literature. The mean Talairach coordinates for the N1 dipole were (5.74 ± 3.77, -11.81 ± 10.84, 53.73 ± 7.30) mm, corresponding to the medial frontal gyrus (Brodmann area 6). This is the first work to localize the source of the N1. It is speculated that the generator of the N1 is the supplementary motor area and that it represents the generation of a contingency motor plan to shape the later phases of the compensatory balance response based on sensory feedback from the perturbation.