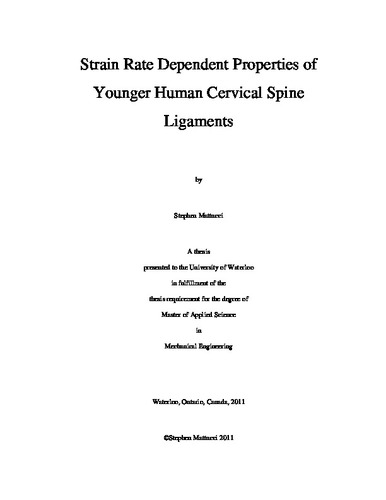 The cervical spine ligaments play an essential role in limiting the physiological ranges of motion in the neck; however, traumatic loading such as that experienced in automotive crash scenarios can lead to ligament damage and result in neck injury. The development of detailed finite element models for injury simulation requires accurate ligament mechanical properties at relevant loading rates. The objective of this research was to provide detailed mechanical properties for the cervical spine ligaments, by performing tensile tests at elongation rates relevant to automobile crash scenarios, using younger specimens (less than 50 years old), and to provide a comprehensive investigation of spinal level and gender effects. The five primary ligaments (present between C2-T1) investigated were: the anterior longitudinal ligament, posterior longitudinal ligament, capsular ligament, ligamentum flavum, and interspinous ligament. The craniovertebral ligaments (Skull/C0-C2) investigated were the tectorial membrane/vertical cruciate/apical/alar ligament complex, transverse ligament, anterior atlanto-occipital membrane, posterior atlanto-occipital membrane, anterior atlanto-axial membrane, and posterior atlanto-axial membrane. Tests were performed within an environmental chamber designed to mimic in vivo temperature and humidity conditions, and specimens were preconditioned for 20 cycles at 10% strain prior to testing to failure. Ligaments were tested at quasi-static (0.5s-1), medium (20s-1) and high (150-250s-1). These strain rates were predicted by an existing cervical spine finite element model under typical crash scenarios. Two hundred sixty-one total primary ligament tests were performed, with approximately even distribution within elongation rate, spinal level, and gender. Another forty-four craniovertebral ligaments were tested. Results were plotted as force-displacement curves and the response characteristics determined from the curves were: failure force, failure elongation, stiffness of the linear region, toe region elongation, failure stress, failure strain, modulus and toe region strain. The measured force-displacement data followed expected trends when compared with previous studies. The younger ligaments had less scatter, and were both stiffer and stronger than the older specimens that were reported in previous studies at both quasi-static and comparable higher elongation rates. Statistical analysis was performed on the results to establish significant effects. Strain rate effects were most significant whereas spinal level effects were not found. In general, gender effects were not found to be significantly different, but consistent trends were identified with male ligaments having a higher stiffness and failure force than female ligaments. The post-ultimate load region of the curves was reported to offer insight into the ligament failure mechanism. The characteristic values obtained were used to develop average curves for each ligament, with the intention to eventually be directly integrated into finite element models to better represent the ligament structures. Curves were developed to incorporate the strain rate, spinal level and gender effects for each ligament based on the statistical analyses. Post-failure response was incorporated into these curves because this region has been shown to have an effect on neck behaviour in mathematical models. Recommendations for future studies include measuring accurate cross sectional areas of ligaments during tensile testing to obtain true stress and true strain measurements to better understand if differences in mechanical properties are structural or material. Other possible improvements would be further testing of young cervical spine ligaments with larger sample sizes to further explore spinal level and gender effects. Additional testing performed under identical testing conditions as the current study would allow for pooling of the results effectively increasing the sample size.